A few years ago you might find yourself in an office without your mobile charger. Back before microUSB became the default charging port, people would walk around asking for “a Nokia charger with a small rounded end” or “a Samsung one that looks flat”. It was a nightmare to get the appropriate charger if you were out, and things have been made a little easier now that a lot of people usually have USB chargers in their homes or offices.

But what about those moments when all you can find is a USB port? That magical cable isn’t in your bag, it’s not in your car and it’s certainly not in your pocket. Do you carry around a cable? Or perhaps carry around the whole charger? Well, things can get even worse if you’ve got an iPhone and you end up somewhere without that magical lightning cable.

The solution, of course, is to carry around the appropriate charge cable. You know that there’ll probably be a USB port somewhere near to where you’re going, but carrying the cable means you can charge up easily.

Except, that’s a hassle really. Remembering to carry the cable around all the time? That’s a bit of a pain. Take, as an example, my charity bike ride to Paris. Weight is at a premium, so I don’t want to have to carry a cable or a charger if I can help it, and if I’m out in the evening I don’t want to have a long cable in my pocket just in case the phone (and the GPS getting me back to the hotel) goes flat. This is where the ChargeKey and ChargeCard comes in. Don’t worry, the picture above may make them seem large, but they’re actually being held by my son 🙂 These two useful gadgets come from the boys at Nomad and they’ve just launched here in the UK. The ChargeKey is a tiny rubber charging cable which slips onto your keyring. It’s strong but slim and you can either buy the microUSB version or the iPhone 5/5s/5c version. Carry the ChargeKey around and you’ll always have the appropriate cable to charge your phone – just find a USB port. Any PC, laptop, TV, car, train, plane will have one and you can even borrow power from the back of games consoles, set-top boxes, speakers and DVD players. Using it is a no-brainer really. Click it on your keys and you’re done. Then simply unhook and use when you need to. There’s a certain amount of trade-off in the length, so you will end up with your phone hooked up right next to the USB port it’s charging from, but I’d rather have a short and small USB charge cable on my keys than a long one. Next up is this, the ChargeCard. It’s a similar idea and a very clever one too. The cable is remarkably thin and the USB connector on both cables is thinner than the one you’ve probably seen on your mobile charger. It still works perfectly though, and you may have seen something similar if you’ve received a free USB stick. The ChargeCard has the main USB port in the centre and you pop it out to connect. It then clicks back into place once you’re done and the microUSB (or iPhone connector) sits on the top-right. The card itself is no thicker than two credit cards and slotted into my wallet without fuss. Both devices had a definite feeling of quality and we had no problems even when our phone was hanging off the charger (as you’ll see in the picture). These are miles away from being flimsy.

So, next time you’re at a relatives’ house, at the library or in a hotel room and you’ve forgotten your charger, just grab your wallet or keys and steal some juice from the TV / laptop or anything else with a USB port sticking out of it. Result.

As usual, we’ve got a stack of additional pictures in our gallery below.. 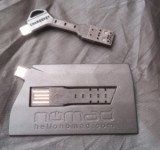 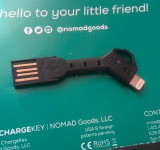 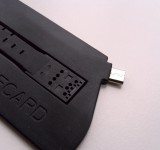 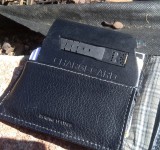 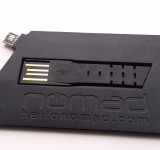 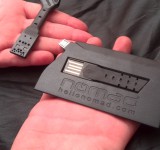 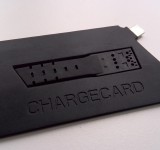 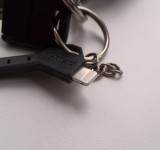 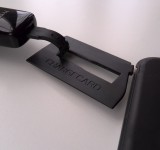