You may remember how I detailed just how much fake news we’re now reading. Printed newspapers are dying and, with smaller budgets, resort to padding out 5-line tweets. Pinch a tweet, add a few random paragraphs, don’t bother with any fact-checking and watch the click-bait money coming in.

As mentioned before, the people we traditionally trust – presidents and prime ministers are now taking to Twitter with cleverly-produced mistruths. They come packaged in catchy GIF images, with buzzphrases stapled underneath. But we’re not checking whether the statements are real. We don’t care. We don’t have time. Meanwhile, the media don’t care either – they just want to exist, and digital revenues are tiny compared to traditional print revenues. 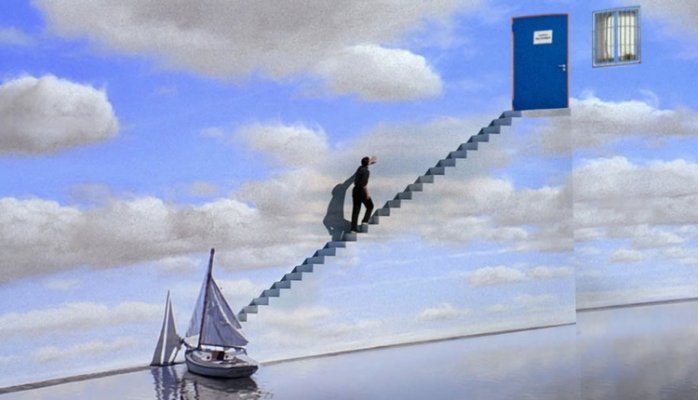 So we’re stuck in a world of bullshit, where fact checking is rarely done and our attention span is too short to remember the truth.

With another election happening in the UK, the traditional rules of engagement are in the bin. Political parties are trying any old stunt, not caring about our trust in their words or their promises. After all, you’ll have forgotten fairly soon. 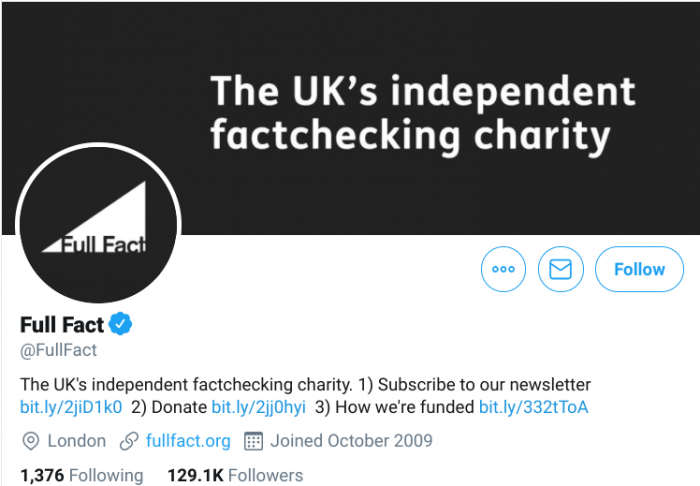 Some, though, don’t forget. Some check to see what the truth really is. Some go to fact checking websites to find out for themselves in order to make informed decisions.

This is rather inconvenient for political parties. They can’t have truths getting in the way of their empty promises. So, just recently, the Conservative government decided to dilute your trust in fact checking services by rebranding their press account into a fact checking service. 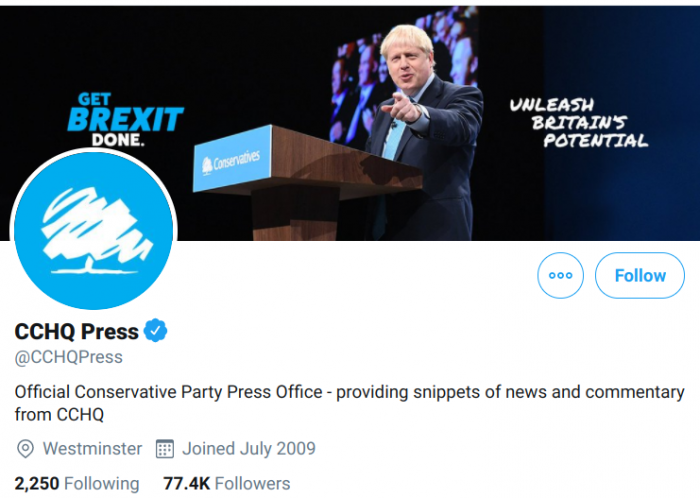 The CCHQ Twitter account has some 77,000 followers, but it changed Tuesday night in a move that North Korea would be proud of. This came in the middle of a big leadership debate on ITV here in the UK. 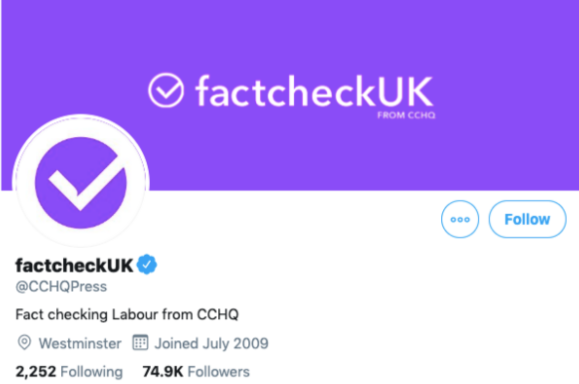 Twitter have derided the move, stating that it has rules in place to prohibit misleading behaviour.

Any further attempts to mislead people by editing verified profile information – in a manner seen during the UK Election Debate – will result in decisive corrective action,

…which basically means “we’ll let you get away with it”.

Government liar, Michael Gove, reacted to the decision by NOT promising to do it again and questioned whether it was misleading. He then went on to try and call the facts “fake news”..

sending Michael Gove out to defend the Tories on trust probably not the best idea CCHQ 🤥pic.twitter.com/eM3bumVN2Z

We’re sliding ever deeper into Donald Trump territory here. The politicians are trying to make you ignore or doubt the truth when it doesn’t cast them in a positive light

Indeed, a recent survey showed that two thirds of people in the UK have lost trust in news, and politicians are happy to see this, as it means they can stoke the flames and dismiss any negative news as fake – transplanting it with their own carefully-crafted crap instead.

As trust in what we are seeing, reading and consuming is compromised, politicians are now turning up their spam machine – eroding trust in fact-checking services too.

A new low? I doubt it, there’s plenty more days of this election campaign to go. Perhaps best of all is that, even after this has all been revealed, nobody cares. The BBC News story about this has only had 165 comments as I type. We don’t even care that we’re being lied to. We almost expect it now, and the politicians can do whatever they want without consequence – they don’t even bother to “do the right thing” and resign if they’ve been caught lying.

We’re in a world where we don’t believe the news and politicians and we don’t care. Worst still, the newspapers and the politicians are well aware of it, and they don’t care either.

What this shouldn’t do, though, is stop you voting. Personally, I wish our political system could be reset. We seem to be stuck with a choice of “terrible party 1” or “terrible party 2”. Let’s choose – literally – anything else.

Update – The Conservative bullsh*t machine has now purchased the LabourManifesto.co.uk domain and is trying to pass it off as a Labour publication.

Update – Figures from the first week of the election campaign show that the Conservatives received millions more in large (over £7,500) donations than any other party. Something is very wrong people. If it looks like a fish, smells like a fish, it’s generally a fish..

Update – The Tory manifesto states that 50,000 new nurses will be recruited. This is a claim echoed in friendly / biased press.

Stop lying to us.