Oh dear. Some serious problems for Samsung this morning as first users of their Galaxy Fold experience broken hinges and flickering displays. This is not what the company wanted at all.

Before I type another word, I should mention that a proportion of the problems appear to be due to US-reviewers trying to pull off a protective film from the screen. Many assumed it was a screen protector, and yanked at it. YouTuber Marques Brownlee (@MKBHD) had the following to say …

I got this far peeling it off before the display spazzed and blacked out. Started over with a replacement. pic.twitter.com/ZhEG2Bqulr

So, if you do pay a helluva-lot-of-money for one of these things, you could break it in seconds by peeling off this layer. Now, whilst we applaud Samsung (and Huawei plus others) for taking a chance on a new form factor, it shouldn’t be this easy to kill it, should it?

The phone comes with this protective layer/film. Samsung says you are not supposed to remove it. I removed it, not knowing you’re not supposed to (consumers won’t know either). It appeared removable in the left corner, so I took it off. I believe this contributed to the problem. pic.twitter.com/fU646D2zpY

Well, it seems that there’s a bit more to it. Samsung do appear to be putting warning notices in boxes, but some of these reviewers are denying seeing them and the Samsung US PR teams are getting a little sweaty because of the negative reviews, tweets and videos that are appearing. Not only that, but think about that moment when you unboxed your latest smartphone. Did you read all the bits of paper and leaflets inside the box before you started messing with the phone?

Another Twitter user, Nirmal Piyumantha, has found a reference to it in the “Getting Started” guide but again – who reads all that? 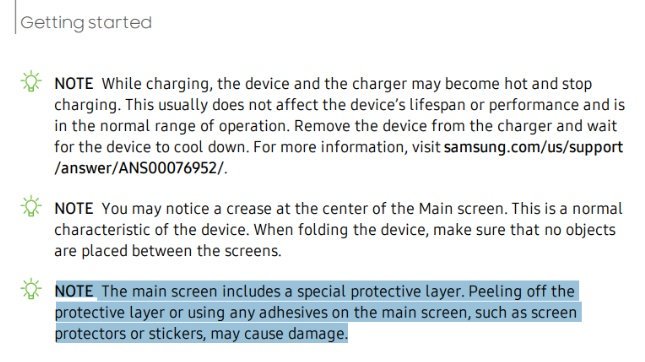 OK, so let’s try and remain positive. Early reviews show that, if you fiddle about with the protective film on the front of the phone, you can break the thing. Let’s just not do that. Let’s move on. It’s a “1st Gen” device after all. Oh, and let’s try to gloss over the fact that the Samsung Fold still has a fold, even when it’s.. unfolded. 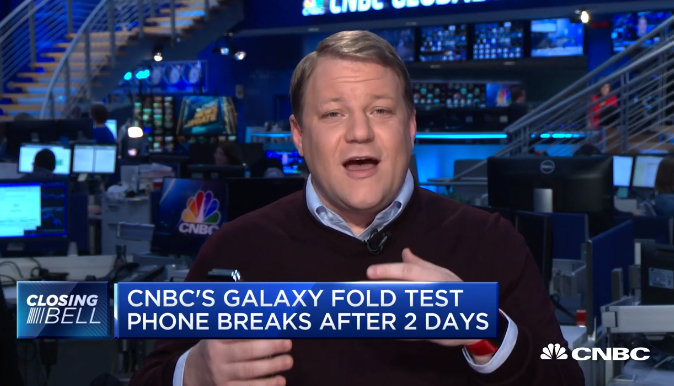 Over at CNBC, their review unit is busted, and they didn’t touch the protective layer…

CNBC didn’t remove that layer, and our screen is now .. failing to work properly. When opened, the left side of the flexible display, which makes up a large 7.3-inch screen, flickers consistently.

Here’s the unit after being used for just two days…

My colleague opened the Galaxy Fold and it started doing this. So, long answer to your question @WilfredFrost, the hinge doesn’t seem very rugged after all. After two days: pic.twitter.com/Z1F8iwjURa

Another reviewer – Dieter Bohn – has seen the hinge on his loaner “bulge”, causing the screen to come out of alignment…

SUPER YIKES: something happened to my Galaxy Fold screen and caused a bulge. I don’t know how it happened, and I’m waiting to hear back from Samsung. It’s broken. https://t.co/p1014uB01D pic.twitter.com/3FZJkWtSKr

He believes that, possibly whilst in his pocket, a small piece of debris may have got into the hinge mechanism and caused it to do this. As you can see on the shot below, when the phone is closed, there’s a gap which could trap small objects.

That gap could allow coins to enter and, if it’s in your coat pocket and the phone slightly unfolds whilst you’re moving around, you could easily trap keys and other items. When the phone closes again, this could damage the hinge.

Imagine jamming a metal bar in a door hinge a then closing a door.

Meanwhile, Steve Kovach has also got a wonky left screen..

After one day of use… pic.twitter.com/VjDlJI45C9

It appears that this is becoming quite a big problem.

Samsung have failed to comment, however they have replaced some devices and warned that the peel-able, removable protective layer shouldn’t be… removed. 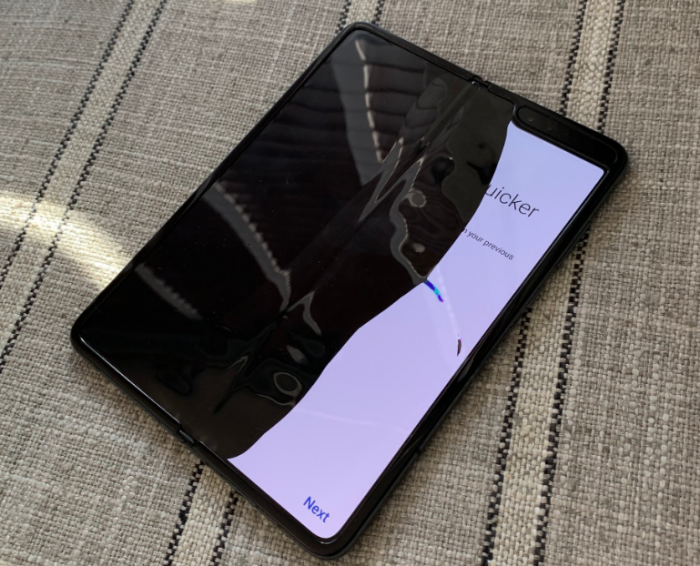 So … what can we say here? We know that Samsung have tested it to death, so why has this happened? Is it just a bad batch? A bad early run of phones? We don’t really know just yet because Samsung haven’t issued a statement. It appears to be a hardware / design problem so it’s not something that is easily solvable.

If quick action isn’t taken, the brand will get hammered again – the same way that it did in 2014 with the Samsung Galaxy Note 7. This is a phone costing $2000 in the USA and £1799 here in the UK. This makes it a really big investment and people need to be assured that the phone is 100% perfect.