I’ve got to tell you, I’ve never really considered a smartwatch until now. Heck, I’ve not even considered a watch full stop for a while. James has given me a Pebble on loan and, I’ll admit, my attitude is changing somewhat.

Here, it’s Android Wear powering the show and, although the backlight only flashes up for a couple of seconds (instead of the Pebble and the always-on screen I’ve got used to in recent days), it has the look of an actual… watch. Sure, it’s a little thicker than I’d like, but it was still a beautiful looking device with a thin bezel around the 1.3″ screen. To charge, you put it near to the charging dock and a magnet pulls it into place easily. It’s almost like a tractor beam and it’s in no way fiddly or cumbersome to do.

However, you can tell from the marketing, the style and the flashy Audi parked on the stand that this is aimed squarely at the cash-rich gent. At £299 (pre-order pricing) it can mean a choice between buying a new phone or buying a new watch instead of both.

The all-metal construction looks brilliant and it was hard to decide which I liked best – the gold or silver. You can change the straps (it’s a standard 22mm) and put your own on if you wish. It didn’t feel heavy or awkward on my wrist and the “OK Google” commands we gave it, even in a very noisy conference, worked well..

Specs include a Qualcomm Snapdragon 400 processor at 1.2 GHz running Android Wear, that 1.3″ plastic OLED (320×320, 245ppi) screen, 512MB RAM with 4GB storage, 9-axis (gyro / acceleration / compass), barometric pressure sensor and the heart rate sensor you can see on the back here.

This uses Android Wear and pairs with your phone, whereas the newly announced LG Watch Urbane LTE uses LG proprietary software and comes with a SIM card. More on that later. Despite the expensive looks, it’s still water and dustproof, IP67 certified. It has a 410mAh battery. A little part of me wanted a Pebble with this quality and design though. 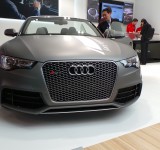 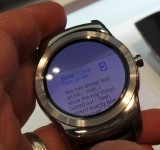 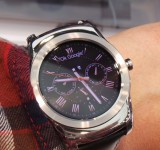 LONDON, 16th February 2015 — LG Electronics (LG) will unveil its first all-metal luxury Android Wear device, LG Watch Urbane, at Mobile World Congress (MWC) 2015. As its name suggests, the smartwatch is designed for a sophisticated and cosmopolitan wearer that delivers unparalleled technology and performance. LG Watch Urbane is the perfect device for wearers looking to add both style and high-tech flare to their everyday lives.

The LG Watch Urbane follows closely in the footsteps of the LG Watch R, the first smartwatch with a full circular Plastic OLED (P-OLED) display, which LG launched in October 2014. While the LG Watch R was designed with the active user in mind, the LG Watch Urbane is more formal with a thinner profile making it perfect for either men or women. Resembling a luxury timepiece, LG combined a classic design and innovative features to add style and convenience to everyday life while raising the already high standards set by its predecessor.

The LG Watch Urbane is crafted around the same 1.3-inch full circle P-OLED display as the LG Watch R but features a narrower bezel that gives it sleeker lines. The LG Watch Urbane has all of the hallmarks of a fine watch, making it the perfect fashion accessory. Its stainless steel body is available in polished silver and is complemented by a beautifully stitched natural leather strap for a more classic look. The strap can be replaced with any 22mm wide band to suit the occasion or the wearer’s mood. Powering all of this is an intuitive touch-based user interface that makes the LG Watch Urbane compatible with smartphones running Android 4.3 and above.

Like the G Watch R, LG’s latest Android Wear device includes a photoplethysmography (PPG) sensor that can measure a wearer’s heart rate and average pulse during exercise. Always-On ambient mode shows the time on the display at all times in dimmed mode, saving battery life.

“The LG Watch Urbane’s classic design and smart features make it the perfect smartwatch to complement our G Watch and G Watch R, which were designed as more casual and active devices,” said Juno Cho, president and CEO of LG Electronics Mobile Communications Company. “LG Watch Urbane is an important part of our strategy to develop wearable devices that are worn and viewed as everyday accessories, not electronic gadgets.”

Additional details including price will be announced in local markets at the time of availability.