Yes, the LG G Flex2 does indeed look like my existing LG G3 after I’ve sat on it. The comparison shots below should hopefully show that. The G Flex2 doesn’t appear as curved as the original G Flex and there’s no concerns about the screen, which could “ghost” a little on the first version. 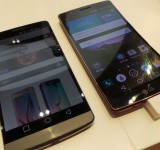 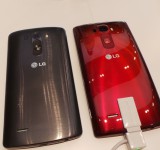 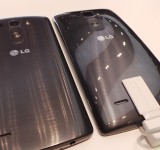 The range of devices includes ..

There’s a number of other handsets in the LG range which have a curve. They include the LG Magna, LG Spirit and LG Leon. They all tend to go down in terms of screen size and specs, but they maintain the same functionality and there’s a noticeable lack of bloatware on all the devices. Basically put, if you have the bottom-of-the-range LG Leon with a 4.5″ screen, 1.2GHz quad-core CPU and 5 megapixel rear camera, you can still do stuff like the “selfie shot” feature which works by firing the camera when you raise your hand.

Here’s that feature in video plus, on the LG G Flex2, how the phone bends. Don’t forget that LG have built this with the motherboard etc already pre-curved, so there’s an element of “play” and they allow for a certain amount of flexing..

Speaking to an LG rep, they told me how hard the company had worked to ensure that the G Flex2 worked perfectly. The interface and the hardware had to be the top priority and, for me, it was so good to see a curved phone without the foibles I saw on the original LG G Flex. Inside there’s a fast-charging 3000mAh battery, plus the G Flex2 features a selfie mode (shown in the video above) which automatically shows your selfie on-screen the second you’ve taken it. Just like a photo booth in a way.

I’ve spent quite a bit of time at the LG stand today and I’ll admit that I’m impressed. Just metres away Samsung staff are struggling to get interest from attendees due to all the Galaxy S6 units being hidden behind glass, and the end result has been an increased attendance at the LG stand, which was swamped for most of the time I was there. 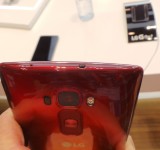 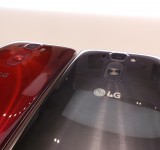