Bear with me on this one, because I will eventually relate this to smartphones 😉

Pirate radio stations have always interested me. Despite endless streaming services and internet radio, pirates still take a chance and launch a station on FM without a licence. It seems that, regardless of the fact that stacks more people are listening to online services, the traditional FM broadcast is still the preferred route to the most amount of people.

However, anyone involved with illegal broadcasting is committing a criminal offence and may be arrested by police, so just don’t try it. If you do, or even allow your premises to be used for illegal broadcasting, then you could face an unlimited fine plus two years in prison.

There is, though, two sides to the pirate radio situation.

Ofcom will tell you that they can cause interference with other stations and air-traffic control. They’ll also tell you how buildings are being broken into (tower blocks especially) to rig up stations. All of this is true.

The pirates will tell you that a lot of commercial stations tend to output generic and crowd / advertiser-pleasing content. Many local stations have been renamed and rebranded in recent years, with several small local stations combined into one station with a geographically larger footprint. The pirate stations offer variety which is missing in commercial and other local stations. This is also true.

The battle, it seems, never seems to be won by Ofcom. Here’s the number of raids they’ve performed between 1991 and 2006 (more recent data isn’t available it seems). You can see immediately that the number of stations really isn’t going down at all. Neither is the amount of convictions. Finding the broadcast sites isn’t too hard, but finding the DJ’s and owners themselves is trickier. It’s all too easy for the pirates to get started too. Just go ahead and buy an FM transmitter from eBay or elsewhere and then find a suitable location. Usually this will be on the top of a block of flats, so major UK cities in particular tend to have many pirate stations.

The transmitter can then be setup and rigged into the mains power of a lift or other comms equipment that has been installed legitimately. I’ve been into a few of these roof-top spaces and there’s a range of legally installed kit from communications and satellite companies, so (if you’ve broken in), finding a spare socket isn’t a problem sometimes. Again, you’re obviously breaking the law here, so don’t do it. 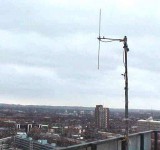 Once the pirates have got a transmitter installed, a frequency is chosen, but without Ofcom involved it could bleed into the legal frequency of another station. This causes interference and drowns out local stations. However, a “free” frequency is chosen and the signal is sent out via an antenna. This will be installed alongside the many other aerials, antennas and equipment that sit on top of tower blocks. It’ll be pretty hard to spot. The next stage, a few years ago, would be to use a microwave connection to connect back to the studios. This, however, can now also be done by using an old laptop with a SIM card in for connecting to the web. Some will also use a local WiFi connection which is either “borrowed” or used by permission if there’s someone in the flats who supports the station. Effectively it makes this a big repeater.

Next, the pirates just setup an internet radio station and stream it. The laptop up on the block of flats will simply receive the stream and broadcast it out. Some stations connect via remote connections to the laptop and utilise webcams to watch for removal too.

There’s a few things to remember. Some pirate stations mention the fact that they’re available online and on FM (like Distinct FM, which I’m listening to right now). However, a lot won’t mention the frequency at all. Usually this is so they can claim that they weren’t aware that their internet-based station was getting broadcast out on FM. It’ll be “plausible denial” and they will ensure that their broadcast mentions only the internet stream and website.

This is all a cat-and-mouse game, and Ofcom admit that their best tool for finding the actual culprits is to listen to the broadcast. They state..

Ofcom is addressing the problem proactively, listening to the broadcasts of illegal stations from its monitoring station to gain information, such as the telephone numbers used in a station’s operation, which network operators may cut off if they are being used for illegal activity. Other information gained from this monitoring, such as companies and individuals using a station for advertising, helps to support enforcement action.

Again, finding the transmitter site isn’t too hard, but catching the actual source of the transmission is more complex. A mobile phone will usually be used by some pirates to take requests and get feedback, but this signal can be traced and located, so some will be clever enough to use remote connections into the phone. We mentioned MightText previously and that’ll let you read messages on a mobile which could be located pretty much anywhere. Suddenly, trying to pinpoint a mobile phone to find the studio becomes pointless. Ofcom can only hope that a call will be made or received on a mobile associated with the station and hope that the location is the studio. Cutting off the mobile is usually the only quick attack they have.

The mobile isn’t the only way to get in touch though, some stations use Twitter and Facebook only, so Ofcom then have to rely on other information to locate the people responsible.

There’s a fact sheet on the continuing battle, and a lot of the images (and some of the details) you see here are from the Ofcom site, so I’m not revealing information that isn’t already out there.

Whilst mainstream local FM radio stations continue to merge and play a generic mix of “please as many people as possible” music, the pirates will continue to operate. Despite internet radio and streaming services becoming more popular, FM is a quick way to reach lots of listeners. The listeners also don’t have to worry about data limits when they’re listening, and in the car it’s simple to get the station on your radio too. There’s no sign of them going away and no sign of Ofcom reducing the amount of stations broadcasting each year.

The internet offers a shopping window of technically advanced kit, and as mobile technology advances, the problem of locating and closing these stations down seems to be never ending.

The video below is well worth a watch if you’ve got a spare 15 minutes and have an interest in all this.