Good old Distimo eh? We all love them.

No, me neither. However, they’ve done some research and, using bits of data from the Apple App Store and Google Play, they’ve got the top apps of December 2013. 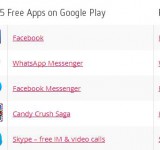 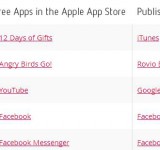 The top free apps from the Apple App Store included the usual suspects – YouTube, Facebook, Facebook Messenger and Angry Birds Go! The number one position went to “12 Days of Gifts”, which lets you download a gift each day—songs, apps, books, films and stuff. As it’s no longer Christmas (despite what my neighbours four doors down might think – TAKE DOWN YOUR MOTORISED REINDEER), that’s since dropped out of the rankings.

Meanwhile, on Android, the top spot went to the Facebook app. Facebook, it seems, is a major part of our mobile experience. We need to stick our head into that never-ending pit of time-wasting egostical pap daily, and it shows. WhatsApp is at number two, with Facebook Messenger, Candy Crush Saga and Skype in third, fourth and fifth position. 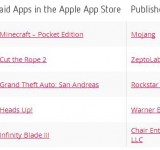 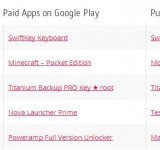 If you pay for your apps then Minecraft seems to be doing really well, holding the top spot on the Apple App store and number two spot on Google Play.

Incidentally, if you like walking around and using blocks to create stuff, I can give you a real version of Minecraft in my back garden. The way I see it, if enough of you come round and move some bricks around, I’ve got me an extension, and it won’t cost £20,000. Boom!

Right, as I’m full of flu and really can’t see this screen I’m going to whack in some screenshots at this point and direct you to their blog for more information.