Motorola have been quiet for some time. Quiet, that is, in the high street. I can’t remember the last time I saw a Motorola device in someones hand, so the Moto G announcement was one to watch.

It has Android 4.3, quad-core CPU, changable rear covers, an “all-day battery” and a 4.5″ HD display. Not only that, but it’s RUDDY CHEAP. At £135 for a SIM-free, unlocked handset, it’s bargain-basement territory from a known brand. This is the budget Moto X that was promised…

Already on Pay As You Go? You can upgrade from £99.95 or, if you fancy a contract instead, you can get the phone free on an £11 per-month plan (100 minutes, unlimited texts, no internet though). Oh, and they’re also giving you a free £5 Google Play voucher if you buy between the 6th and 13th of December.

Sure, there’s no chance of getting 32GB of storage, but for less than £160 for 16GB and a decent spec list, it’s not half bad. We can’t wait to get our hands on one, but until then, here’s a huge gallery of pictures to feast your eyes on. 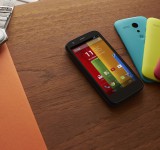 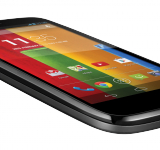 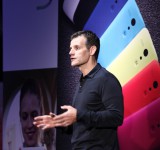 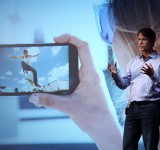 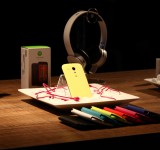 All the press release details from both Motorola and Phones 4u are below for your delectation..

Introducing Moto G: An Exceptional Phone At An Exceptional Price
People all around the world want to be a part of the mobile Internet so they can access the world’s information, share, and connect with the things that matter to them. But the smartphone industry has relegated hundreds of millions of smartphone buyers to second-class status, preventing them from experiencing the mobile Internet at its best.

That’s because price-conscious consumers who don’t want to pay $600 or more for high-end smartphones have been left with two bad options. The first is to buy cheap, new smartphones made with second-rate technology that don’t do justice to modern apps and experiences like navigation, video chat and games. The second is to buy “low cost” versions of premium products that were released two or three years ago and are already obsolete.

We think there should be a better option. Everybody deserves to be on the mobile Internet, and price shouldn’t stand in the way of anyone having a truly good smartphone to get them there.

Today we’re introducing Moto G, a smartphone that delivers a premium experience for a third of the price of current high-end phones. Moto G includes:

A brilliant 4.5-inch HD display – the sharpest in its class – that goes edge-to-edge so you can enjoy movies, photos, video chats and more.
The newest Qualcomm® Snapdragon™ 400 processor featuring a quad-core CPU for seamless multitasking and enjoying the web, videos and games, with all-day battery life.
Android 4.3 Jellybean, the most up to date Android of any phone in its class, with a guaranteed upgrade to Android 4.4 KitKat at the beginning of 2014. No skins to clutter or slow the experience, and great performance with Google’s unbeatable mobile services such as Gmail, YouTube, Google Maps, Chrome and Hangouts.
Stylish design with a comfortable curved back and 19 customization options, including interchangeable Motorola Shells and Flip Shells in seven colors as well as Grip Shells in five colors.

Moto G goes on sale this week in Brazil and parts of Europe and will be available within the next few weeks throughout Latin America, Europe, Canada and parts of Asia. It will be available in the US, India, the Middle East and more of Asia in early January. Moto G will be in more than 30 countries with 60 partners by 2014.

In the US, Moto G will be sold on Motorola.com, with no contract, no SIM lock and an unlockable bootloader for USD$179 with 8GB of storage and USD$199 for 16GB. Moto G will also be available through various carriers and retailers.

IMAGES & B-ROLL: Click this link (also in the footer) for images and b-roll (you agree to our license terms when downloading images or video)

Certain features, services and applications are network dependent and may not be available in all areas; additional terms, conditions and/or charges may apply. All features, functionality and other product specifications are subject to change without notice or obligation. Contact your service provider for details.

MOTOROLA and the Stylized M registered trademarks of Motorola Trademark Holdings, LLC. Google is a trademark of Google, Inc. All other trademarks the property of their respective owners. © 2013 Motorola Mobility LLC. All rights reserved.

The new Moto G is available to buy at Phones 4u NOW!

13th NOVEMBER, 2013: Today we’re thrilled to announce that the highly anticipated Moto G – the first device launched in the UK developed under Motorola’s Google ownership – is available to buy now at Phones 4u online, and will be available to buy in our 700+ stores by this Friday 15th November 2013.

Announced by Motorola just moments ago, the new Moto G will be available across a range of price plans, starting from as little as free on tariffs priced from £11 per month contract, or just £134.95 SIM free, allowing everyone, regardless of budget, to get their hands on this exceptional phone, for an exceptional price. You’ll also only be able to get the Moto G with a white ‘back’ case exclusively at Phones 4u!

Scott Hooton, Chief Commercial Officer at Phones 4u comments: “There’s a huge amount of buzz at Phones 4u as we prepare to welcome Motorola’s new handset into our stores and online. It’s been an incredibly busy, exciting and innovative year for handset launches, and as the countdown to Christmas quickens we know appetite for new smartphones is high, and we expect the new Moto G to be under a lot of trees this Christmas”.

Make sure you snap up your very own Moto G before anyone else by visiting Phones 4u online today. The new smartphone will be available in a range of price options at Phones 4u, including:

o If purchased between 6th December and 13th December on pay as you go, you also get a free £5 Google Play voucher

· Contract: Free on tariffs priced from £11 per month and above

The Moto G is designed for all the things you want to do—taking and sharing photos, watching videos, checking scores, getting directions, listening to music, you name it. Moto G also gives you choices. Different backs you can switch out to reflect your unique style, and access to more than one million apps on Google Play to create your own mobile experience.

Keep up to date with all the latest Moto G news by visiting Phones 4u.