Doro, like Fujitsu and their Stylistic S01, are pushing phones to elderly / senior customers.

Is there room for two competing companies in this sector? Well yes, and it’s only going to get bigger. Doro tell me that some 80% of people aged over 65 now have access to a mobile and half of them are considering a “smart phone” when they upgrade. Here in Europe the elderly population percentage is growing, and they’ve just announced that the new Doro PhoneEasy 810 (which sadly isn’t on display just yet) will be their first “touch only” model.

Like the Fujitsu solution, Doro have their own interface which sits on top of Android. However, they also have their own OS which they use on other Doro handsets. The current Doro PhoneEasy 740 uses Android and has a 5 megapixel camera, GPS, slide-down numeric keypad and that custom UI. There’s some thoughtful features and tweaks to make it easier to use, like a big “OK” button and instant access to your dialler – no on-screen softkey, just a big green “call” button and a big red “drop” button.

There’s a web interface too, which a carer or relative can use to keep in touch with the user. I spoke to Chris Millington, MD for Doro in the UK. He showed me the phones and how easy it is for users and relatives to communicate through both the phone itself and an easy-to-navigate web portal which allows both to send and receive web pages and information. Their “DoroExperience” system has already been a phenomenal success. It allows easy setup of the phone, contact entry and you can push apps out to the phone automatically via a their DoroExperience web portal. Doro do, however, have to be a little careful about how phones are marketed to end users. Here in Europe the elderly population don’t necessarily want to be sold a phone with “an emergency button” (which is on the back) so Doro name features differently. There’s undoubtably all the safety features you could want, including an “ICE” (In Case of Emergency) screen used by emergency services. This contains information such as allergies, medication and existing conditions.

They’re also finding that it’s not just the elderly who are after this more simplistic interface, as many have now become perhaps tired of looking at thin, expensive smartphones with “complicated” user interfaces.

Doro handsets are selling well and are available in most mobile stores, even your local supermarket. Sales are up and business is definitely good. While other companies release more and more smartphones, Doro can step in with inexpensive and easy-to-use handsets which also appeal to those wanting a traditional feature phone. 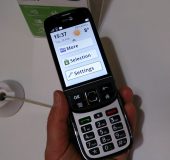 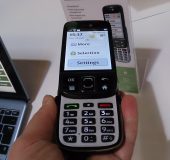 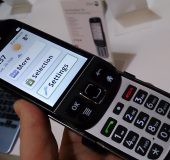 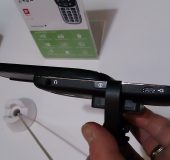 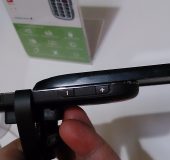 The Evolution of Easy Smart Phones
Doro gives a taste of things to come, and the reason why…

London, 27 February 2013: 80% of people aged over 65 years now have access to a mobile phone and half of them are actively considering going ‘smart’ at their next upgrade. Less than one in five seniors has a smart phone – so the market opportunity for progression from feature phone to smart device is clear.

The company is responding to this wave of change and will be revealing its next smart phone during the second half of 2013. The highly anticipated Doro PhoneEasy® 810 will be the company’s most liberating and inspiring handset to date. It will give the user greater freedom from the boundaries of today’s technology. The design will focus on ease-of-access and usability to create a fun, enjoyable experience. It will empower the user to do much more with their mobile phone by offering a wealth of new features and functions.

Doro PhoneEasy® 810 will be Doro’s first ‘touch only’ model and will come in an ergonomic form, with easy grip and soft touch coating. The device will be powered by Doro’s own smart interface – Doro Experience® – which uses the company’s IP to make applications and software easier to use.

Chris Millington, Managing Director of Doro UK commented on the launch: “The senior mobile market is rapidly changing and we understand this. In response to these changes we’ll be launching our second smart phone later this year. To keep abreast of the dynamic senior segment new designs and form factors are required. The reason our devices succeed is that we give absolute granular attention to every possible detail in the design process. Most importantly our new smart phone will not be another ‘me too’ touch screen device. Our handset will be a liberating device and a technology challenger in true Doro style. We will offer a significant point of difference.”

The research was conducted by IPSOS for Doro and investigated purchasing habits within the senior audience segment1. Findings show that on average a senior retains their mobile for a little over three years (38 months). This is far longer than most other mobile users who on average keep a mobile for between 18-24 months. As such, seniors expect a lot from their mobiles and demand more quality.

Chris Millington concluded: “Our current position as market leader within the easy mobile category, combined with our previous experience of delivering best-of-breed, award-winning smart devices and our deep consumer insights, puts us ahead. We are the premier handset partner of choice for those who wish to ride the wave and win.”

Doro launched its first smart device in 2012 – Doro PhoneEasy® 740 with DoroExperience®. The handset has seen phenomenal success in major markets including the Nordic region – which is further testimony to Doro’s winning approach.