Home
/
Android
Software (Android)
Android adverts – How do you deal with them?

I’ve been accused of being an Android fan. To be honest, that might be true, but it wasn’t always this way. When I attended the HTC Hero launch I was a firm Windows Mobile fan and actually walked out of the launch before it had finished.

Then HTC sent me one for a week and, I was hooked. From then on, an Android phone has always sat in my pocket. This was a pretty big decision for me because, despite what people might think, I’ve don’t change handsets that often. Since I switched my main handsets have been the HTC Hero, the HTC Desire and now a rather battered Samsung Galaxy S2.

However, Android has a problem. One which really gets on my nerves and one, in my opinion, is getting worse. Adverts.

Android have gone for the “open” approach so apps flood easily into the Google Play store. Many Android owners, and I’m prepared to put bets on this, probably haven’t purchased an application. Many apps are therefore free, but app developers have to make up for that by sticking adverts in.

Adverts, if I’m honest, I don’t mind. It’s a catch 22. If you don’t pay, you don’t get. If you want to try the application or game for free, there has to be something in it for the developer. Ads in applications are considered the norm, but just like TV adverts, people usually ignore them. So advertisers, or rather “advertising systems”, have to find ways around this.

My son loves games. I don’t let him use the phone that often, but when he does manage to grab it, he’s clever enough to install games on his own. He’s only 4, but he opens a game, it’ll recommend another game, he downloads that, opens it up, then it recommends another game. After a few minutes my app list suddenly looks like this…. .. which is bad. If you miss these then you’ll soon find out what’s happened as “helpful notifications” popup in your Android notification bar. Worse still, you may even start seeing adverts appearing which show pictures from your own Gallery.

The knee-jerk reaction is usually to uninstall these apps and curse the developers for using such invasive and annoying advertising systems, but there’s other ways of dealing with this. I’m currently using Ad Network Detector. It’ll scan all the apps on your phone and will show what apps are doing. The ones I get particularly annoyed with are those adding messages into your notification bar (at the top of your Android screen) when you’re doing other things. For the most part, you can usually opt-out of the particular advertising scheme you probably blindly accepted during the install phase, which makes things a little more bearable. You can see some screenshots of me using it in the gallery below.. 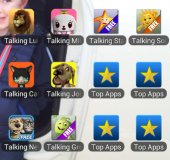 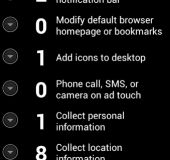 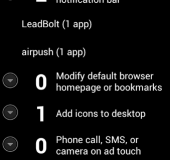 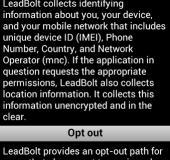 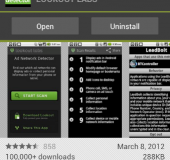 There’s other apps to be found in the Google Play store for blocking or removing ads. Some require root access as they re-write the “hosts” file to stop ads appearing, but this will block traditional in-app adverts which are the bread-and-butter of most developers.

As you can see, this situation still isn’t perfect, and I’d like to see advertising access controlled a little more. It’s still all too easy for your personal pictures and information to be used, accessed and shared just to make some cash or to shock you into installing something else.

So, let me know. What do you use and how do you deal with the intrusive ads ?