I’ve been using ICS for about a week now on my Nexus S and feel I have enough experience with it to note down my impressions. This isn’t a structured review by any means, just my comments on things I like and dislike.

I love the new UI. The Holo theme looks great and the general fit and finish of the OS feels of a much higher quality than previously. There are so many little touches which add up to a big difference.

Navigating around the UI is smooth and fast, without the stutter and lag of older versions of Android. Despite my Nexus S being over a year old it’s been more than up to the task of handling ICS effortlessly. I can’t imagine how good the experience is on a Galaxy Nexus.

The OS as a whole also feels more cohesive. It’s hard to explain but the various elements feel like they fit together perfectly. Google’s attempt to make features more visible by introducing the action bar in apps should also hopefully lead to a more consistent UI across all Android apps.

There’s not much to say apart from it looks great! I’m no font anorak but to my untrained eyes it looks clear, legible and attractive.

The addition of thumbnails to various parts of the UI really helps to provide a more pleasant experience while also just being plain useful. It makes a massive difference when switching between things like broswer tabs and apps as you can quickly pick out what you’re looking for. But even things like notifications now also have thumbnails, so for example a new email will display the sender’s contact image. It’s small detail but a nice touch. 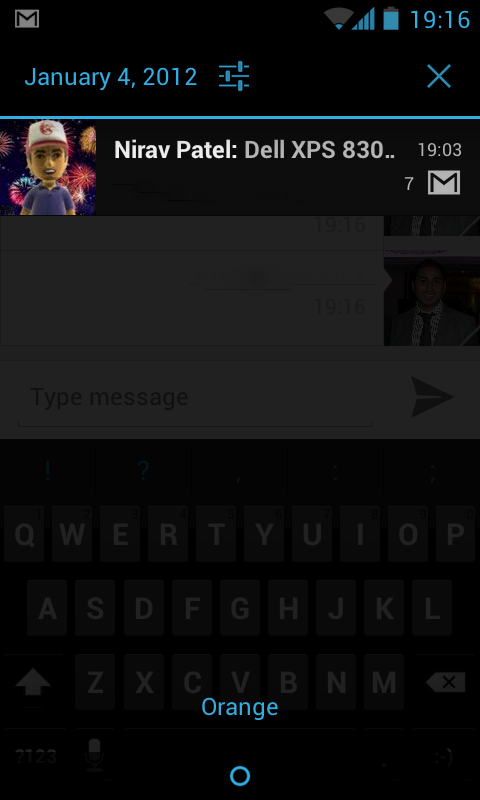 I know it’s copied from Web OS, but swipe to dismiss is such a great feature in use. It just feels so natural to dismiss things you no longer need/want by literally swiping them off the screen. In ICS you can use it for notifications, browser tabs and apps.

The addition of previews and swipe to dismiss really make this much more useful and easy to use than it’s previous incarnation as a grid of app icons. This must be even better on the Galaxy Nexus with its dedicated button, as opposed to on my Nexus S where you still have to hold down the Home button to get to it. I’d love to be able to remap my search button to app switching.

Yes, it’s very smooth! Pretty much iOS like in my experience. Long lists are now a pleasure to scroll through!

I can’t believe it’s taken this long for Google to implement a native screenshot feature. You shouldn’t have to root your phone and install a third party app to capture an image of your screen. I particularly like that you get a notification of the screenshot which allows you quickly access the image you’ve just taken.

Tab switching in the browser now uses the same UI as that for switching between apps. It makes distinguishing between your open tabs much easier and there’s also swipe to dismiss to quickly close unwanted tabs.

Another great, though more hidden, addition is the Labs feature which eliminates all the the UI Chrome and instead introduces a popup menu when you swipe in from the left or right. It’s a great way to maximise screen estate while also being able to quickly access important functions. 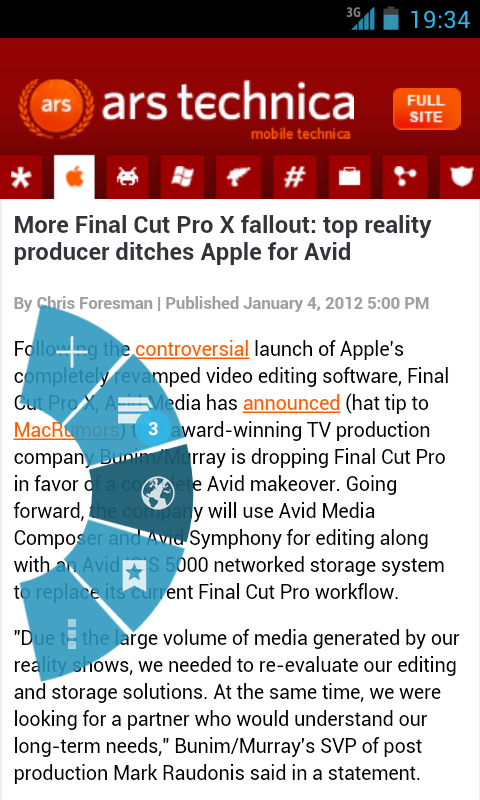 They may have borrowed the implementation from Apple, but the ability to quickly make folders by  simply dragging one item on top of another is very welcome. I also like how they open quickly, without any pointless animations, and obscure the rest of the desktop as little as possible. 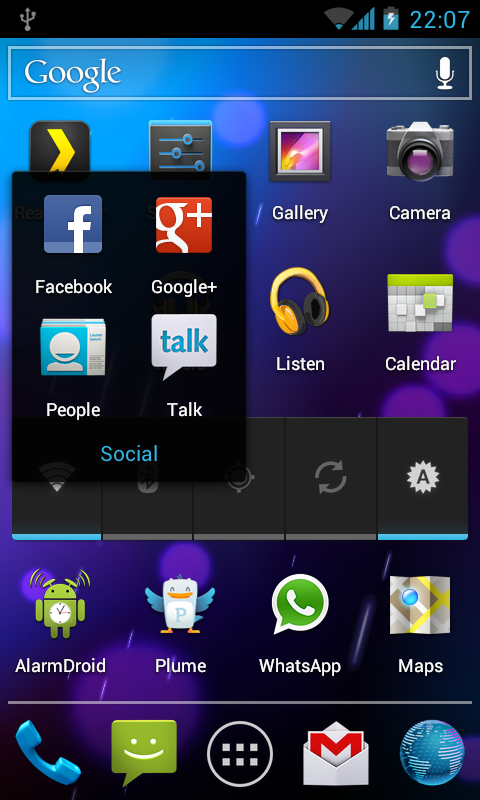 One of the things I love(d) about Android is the ability to long press on various things to access further options. So when browsing my call log I could long-press on a contact to quickly send a text. With ICS, Google have started to remove these menus with the aim being to make functions more visible and obvious for the user. While it’s a laudable enough goal, I wish they could do this while keeping the long- press menus for power users. I really miss the long-press functionality.

ICS Gmail is pretty awesome. As with ICS in general,the UI has been overhauled to make most frequently used options available on screen in the action bar, and not hidden in menus. So you can finally compose a new email directly from your inbox! There’s also one touch access to your recent folders and labels. Again, little touches that makes navigation easier and faster. 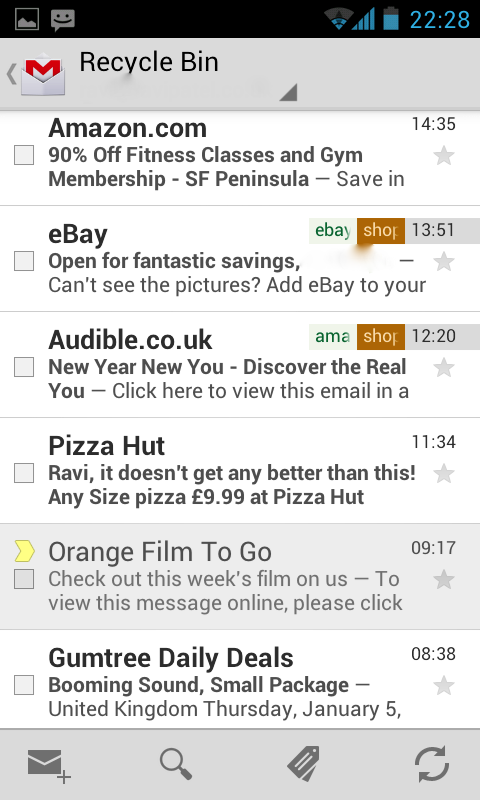 One tap to compose an email... Genius!

For some reason, when on the call screen you can’t pull down the notification curtain. This always worked fine up till ICS and I’m finding it really annoying as you have to back out of the phone app before it works. Why?

I know that many phones have had the ability to reject a call with a text for a while but it’s never a feature I’ve used until now. In ICS, Google have made this one of the default options alongside answer and reject and in the process made it far more useful. One further tap later your text is on its way. Great stuff.

I’m not sure if this is ICS or my Nexus S but it does seem to boot very quickly. 30 seconds from off to usable. Still no option to reboot when you press the power button though!

This is one of the default live wallpapers and I simply love it. I don’t care if it’s eating up my battery!

Being able to resize (some) widgets is a nice touch, even if third party launchers have been able to do it for a while. It does give you more flexibility on the layout of your homescreens which is always good when space is at a premium.

Widgets now populate a second tab on the app launcher where you can actually preview them before adding them. This is quite useful, to the extent that it saves you having to install a widget to even see what it looks like, before deleting it when you realise it’s rubbish.

However!… I can’t understand why Google have removed the ability to add widgets and shortcuts by long-pressing on the homescreen. This now only offers the option of changing your wallpapers. Why keep the long-press for some options but not others? 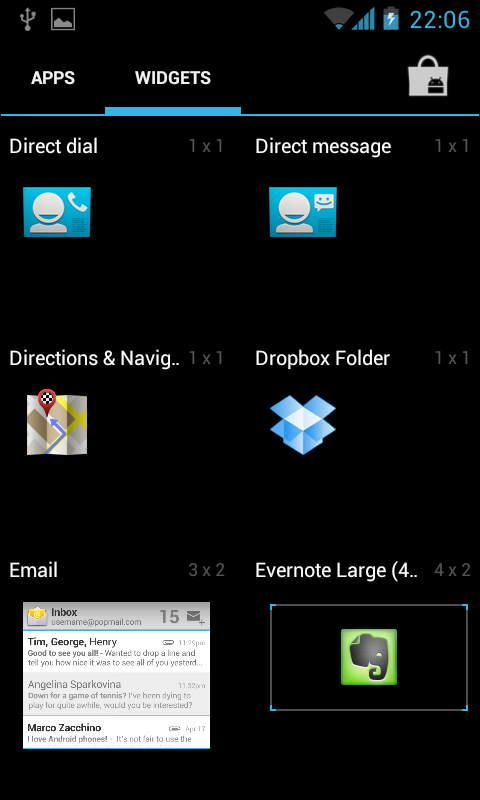 This now features at the top of every homescreen and while it doesn’t really bother me it does seem like a waste of screen estate, especially given that it’s only a shortcut to the search app and not an actual text box. That and my Nexus S has a perfectly servicable search button.

It’s not perfect but it’s enough to make me finally say goodbye to LauncherPro. I can just about make do with four shortcuts in the dock and general performance is smooth and quick. But I still dream of a scrollable dock, swipe gesutres and pop ups being added one day. Maybe Google with finally hire Federico Canales?

Google have implemented the ability to swipe across tabs in some apps. Google Talk has actually had this for a whlie, where you can swipe left and right to cycle through your open conversations. In ICS, Google have extended this gesture to the phone app and Gmail. In the phone app you can now swipe left and right between the dial pad, call list and contacts while in Gmail it takes you to the next or previous message.

It’s a really intuitive gesture that again feels natural and also enables fast navigation around the UI. I hope Google extend its use in future versions of Android along with the ability to cycle back to the start when  you reach the end.

I know it’s early days but I haven’t seen many apps that take advantage of the new ICS UI. Dropbox is the only example I can think of among the apps I regularly use. Hopefully this will improve over time but it’s disappointing that it takes so long in comparison to iOS where apps seems to be updated much more quickly to support new OS releases. I’ve also had a few issues with some apps which refuse to work on iOS altogether. 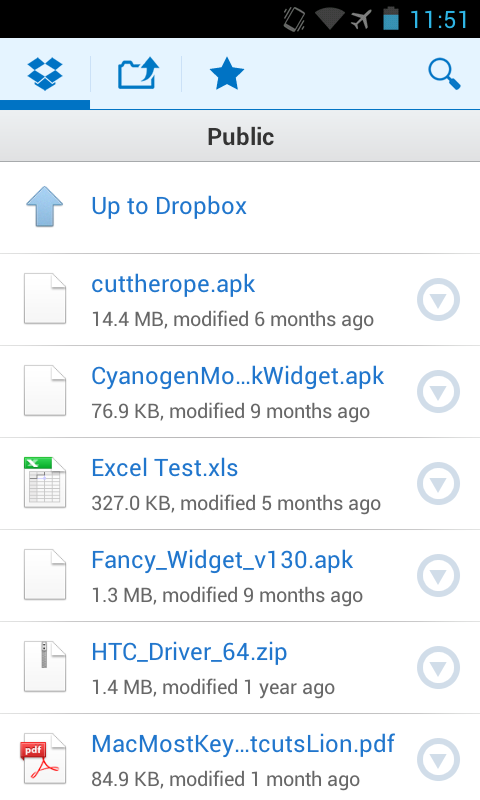 I know I sound like a fanboy but I absolutely love ICS. It makes me want to just play around with my phone for the sake of it again. I’d begun to get a little bored with Android, hence my flirtation with iOS devices, but Android now feels fresh and exciting again. I haven’t been a fan on Android skins for a while now but with ICS I’ve now made the jump to a Nexus and I won’t be going back to anything else. This is the way Android should be experienced.