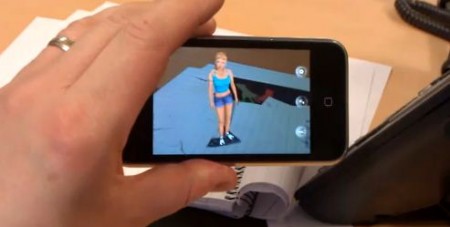 Yesterday I bumped into a guy called Chris from UR-AR. He brought some bits of paper and his iPhone with him and started talking about Augmented Reality. “Yeah”, I thought, “I’ve seen it before, Layar and all that”. But no, I hadn’t seen it all.

Things have really moved on now. I’ve probably been living under a rock for too long and missed most of this. This kiosk, which was filmed about two years ago, shows the power of Augmented Reality in the retail space..

Chris showed me some samples from different AR browsers and an app called “AR Girl” on the iPhone. To use it you simply draw the letter “V” on a piece of paper and then point your camera at it. The lovely lady appears and dances to music. When you move your phone she’ll stay on the spot. It’s really cool.

Another demo featured the iPhone being pointed at a picture of a trainer. Instantly the trainer appeared in 3D – you could zoom in, change the colour and then click “buy”. It opens up a massive door for online retailers.

Everything is probably best seen than explained, so here’s a quick video we filmed. If you’d like any information on all this, check out www.UR-AR.com

I’d love to see more for apps for Android. Does anyone have any favourites?

Oh, and here’s one more example of Augmented Reality in action. Sure, there’s a massive potential for advertisers, but we’d love to see more happening in the mobile world too.