I’ll be honest, we used to ignore the Galaxy A-range phones quite a bit. Our attention was taken by the Samsung Galaxy S models, but the “A range” are actually very impressive.

Samsung have just added another phone to their line-up. This time it’s the Galaxy A21s smartphone, which adds enhanced features and innovations to the Galaxy A series. 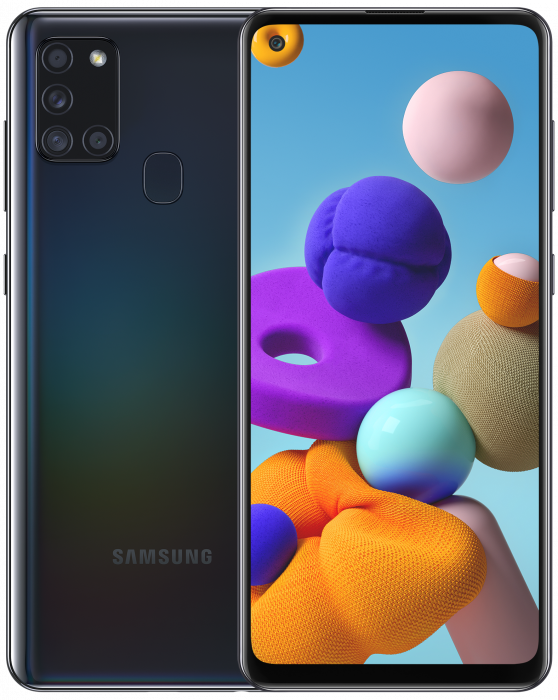 First of all, if you buy it from Samsung channels and UK retailers before December 31st, you’ll bag yourself 6 months of Spotify Premium. That’s already a pretty good deal considering that this is a £179 phone and the price for 6 months of Spotify alone is £59.94.

Around back there’s a 48 megaxpiel main (f2.0) camera and a wide-angled 8 megapixel lens, a 2 megapixel depth cam and a 2 megaxpixel macro lens. Up front is a 13 megapixel f2.2 selfie shooter.

This one is powered by an octa-core (quad 2GHz and quad 2GHz) Exynos 850 CPU.

Wait.. Exynos? Who’s that? Well, like Huawei (with their HiSilicon processors), Samsung make their own processors too. So, on this mid-ranger you get the Samsung Exynos 850.

There’s 3GB RAM, 32GB of on-board storage and a microSD card slot for more. It’s also a bit of a challenger against the Moto G8 Power because there’s a 5000mAh battery and 15W speedy charging in this.

We’re waiting to hear whether this has NFC but there’s a rear fingerprint scanner and face recognition.

More on the Samsung Newsroom