So, the launch has happened and it’s now time to get up close and personal with the Honor 20 Pro. Now, before we get into this fully, I would like to thank Ricky West from TechTalk. He has provided us with the close-up shots of the device. I was only able to get a brief hands-on with the Moschino Honor 20 Pro at the event today, so he’s really helped out. Ricky runs a Youtube channel and it is well worth checking out. 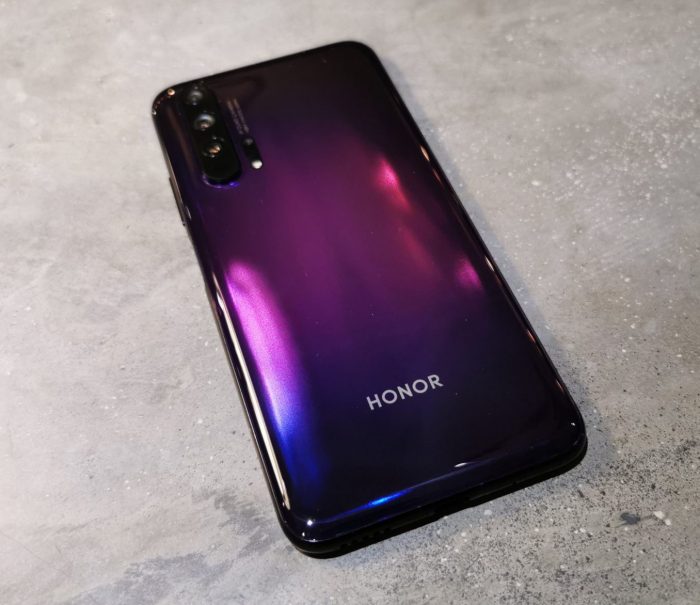 This is the Phantom Black variant of the device and I know what you’re thinking. Yes, it does look purple, you’re right, but only in certain light and at certain angles. That is the 3D Mesh finish at work in all its glory. 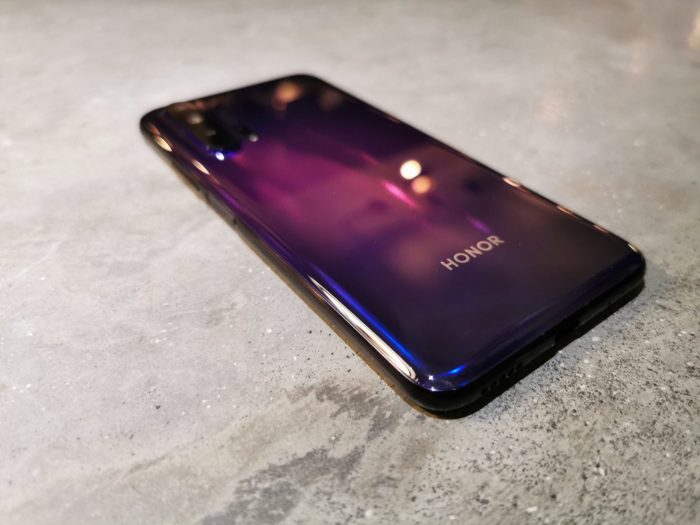 One thing that I think we can safely say is that it’s stunning in this colour. Definitely different, but in a very good way. 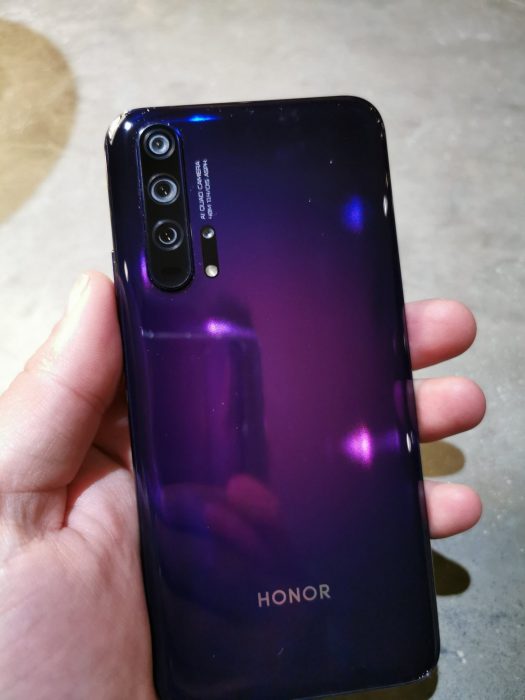 Here’s another shot of the camera layout, with that asymmetric L-shaped design and the 4 camera setup… 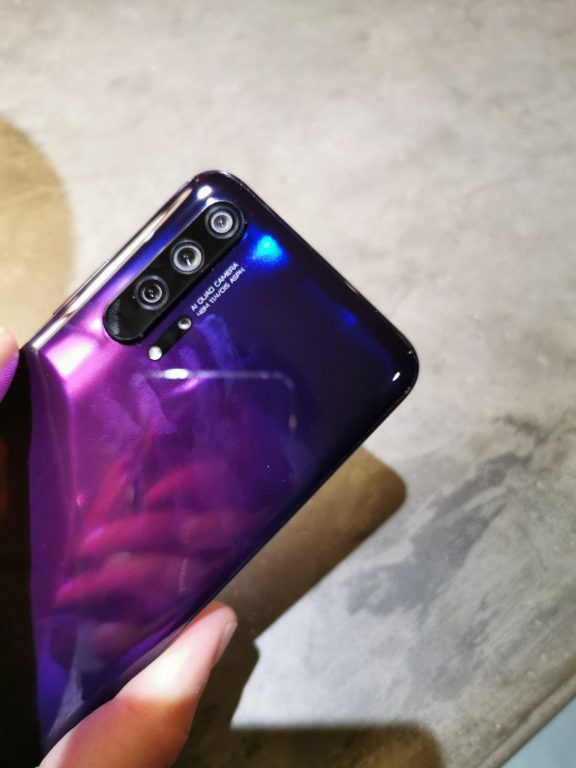 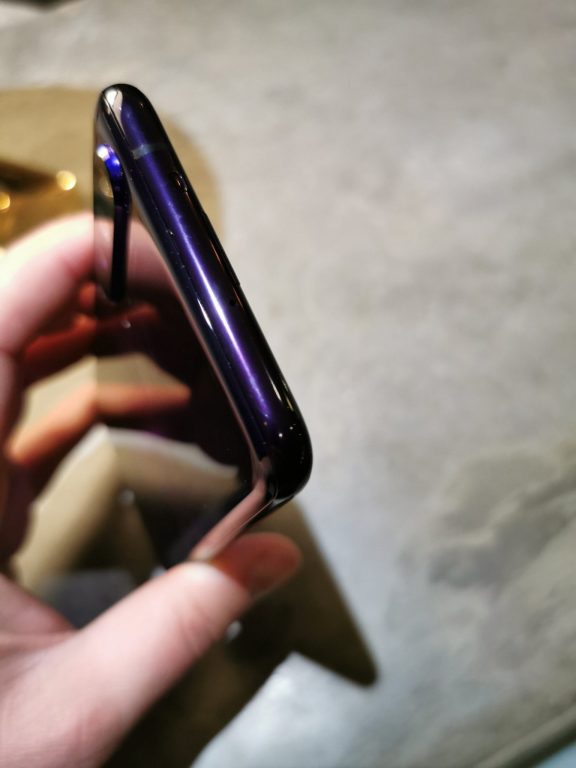 On the top of the phone there’s no ports, but there is a mic and also an IR emitter (as is the Honor/Huawei way). It is very difficult to see with the shimmering colour effect though (you can see it in the hands in video below).. 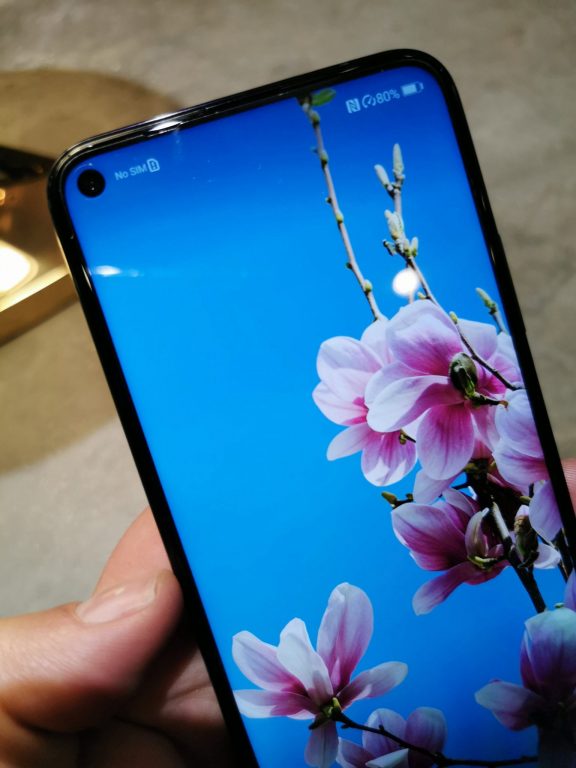 Finally the face of the phone with the minuscule 4.5mm 32MP camera. This takes some really good photos from what I’ve seen and, if it is the same sensor as the P30 Pro then it should be great. 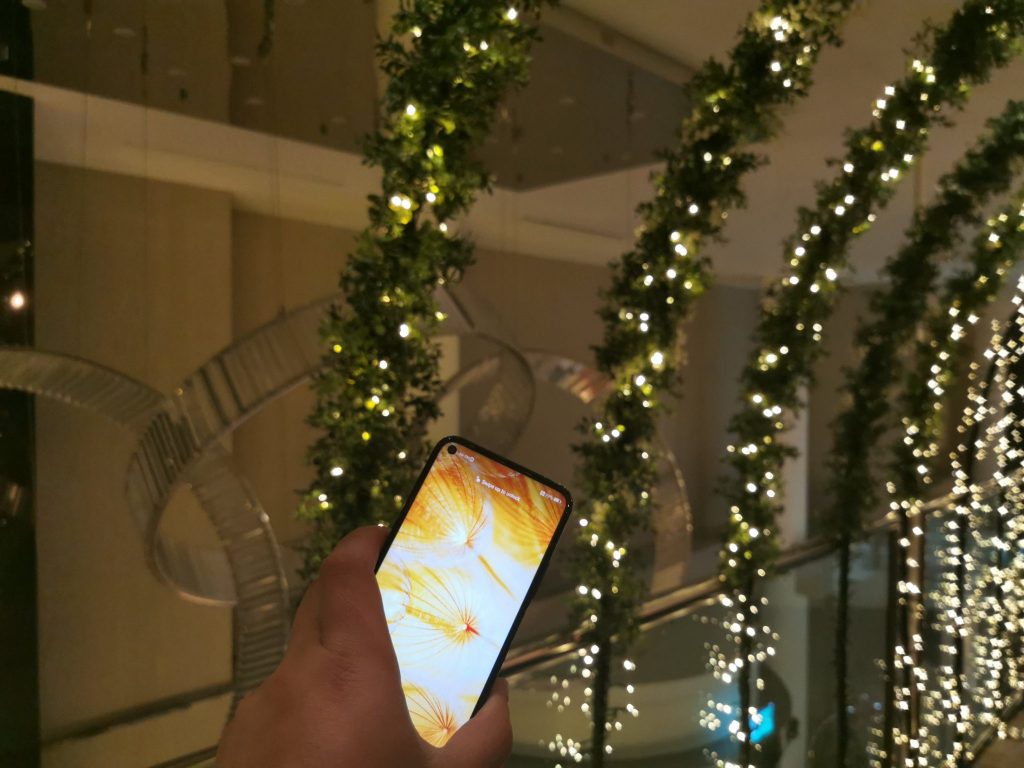 The screen is very bright and clear, but perhaps expected from an AMOLED screen with a very high 1080 x 2340 resolution and high PPI of 412. The screen-to-body ratio is brilliant at 91.6%. This makes for almost invisible bezels, giving a great viewing experience. In a bit of a switch we now have the Phantom Blue.

In this side view we can see the fingerprint sensor which will unlock the phone in 0.3 seconds. It can also be used to trigger the in-built voice assistant which is a nice use of the space. It is very naturally placed and falls just below your finger when holding the phone, as you can see in this next shot. Another close up of the fingerprint sensor.. 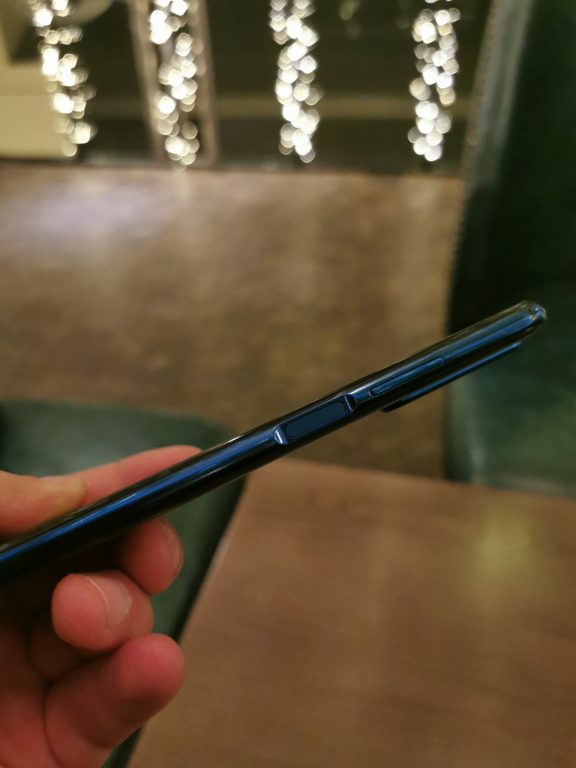 Below we can see the USB Type C port that will support charging speeds of up 22.5W. It’ll also pull double duty as the headphone port. Gone is the  “courage port”, or 3.5 mm headphone jack as we more commonly know it. Through that connection the phone will push out Virtual 9:1 surround sound which will be awesome, and I look forward to testing it out as soon as I get hands on with the phone. 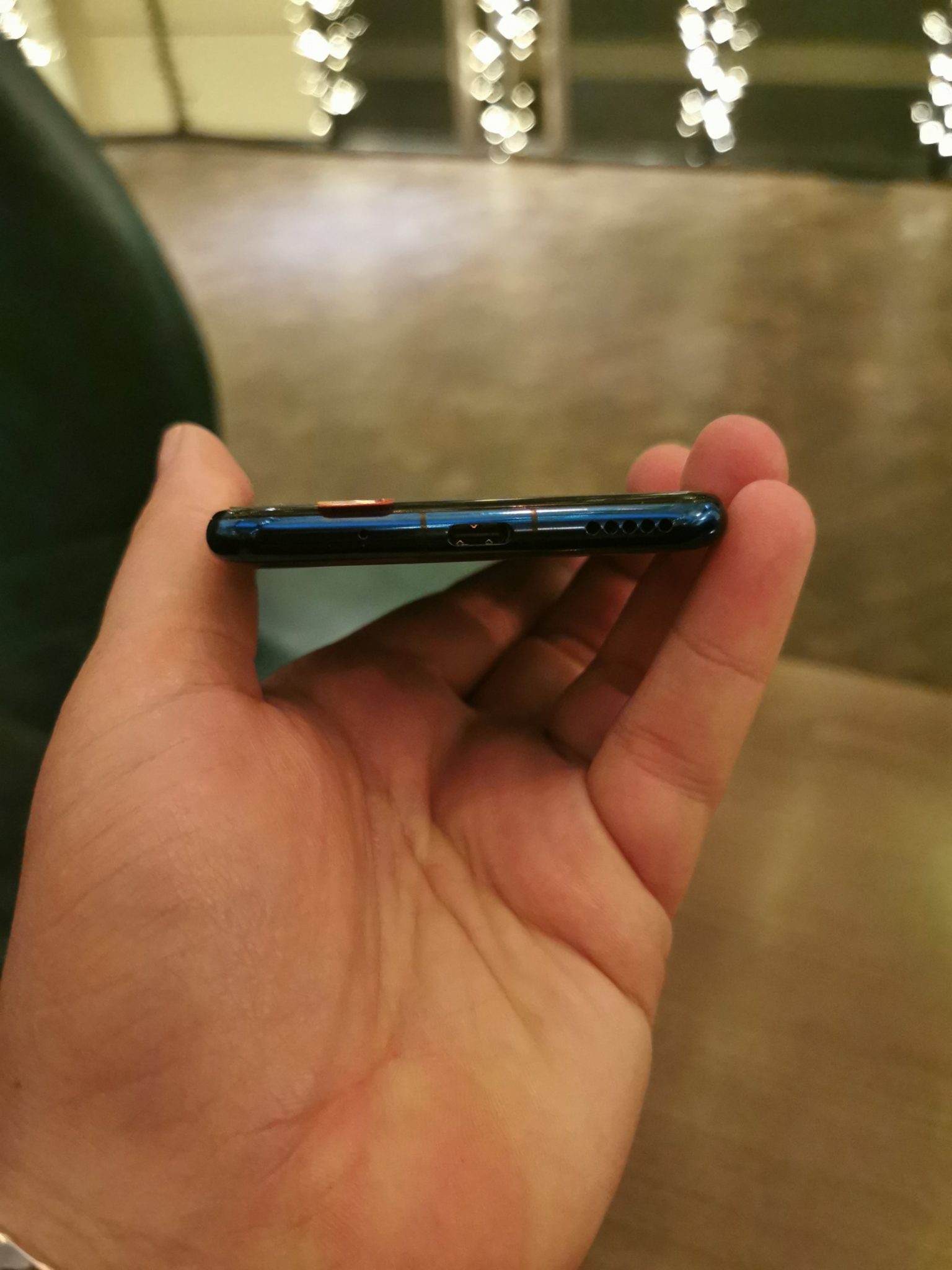 I will leave you with one more pic of the camera layout.. 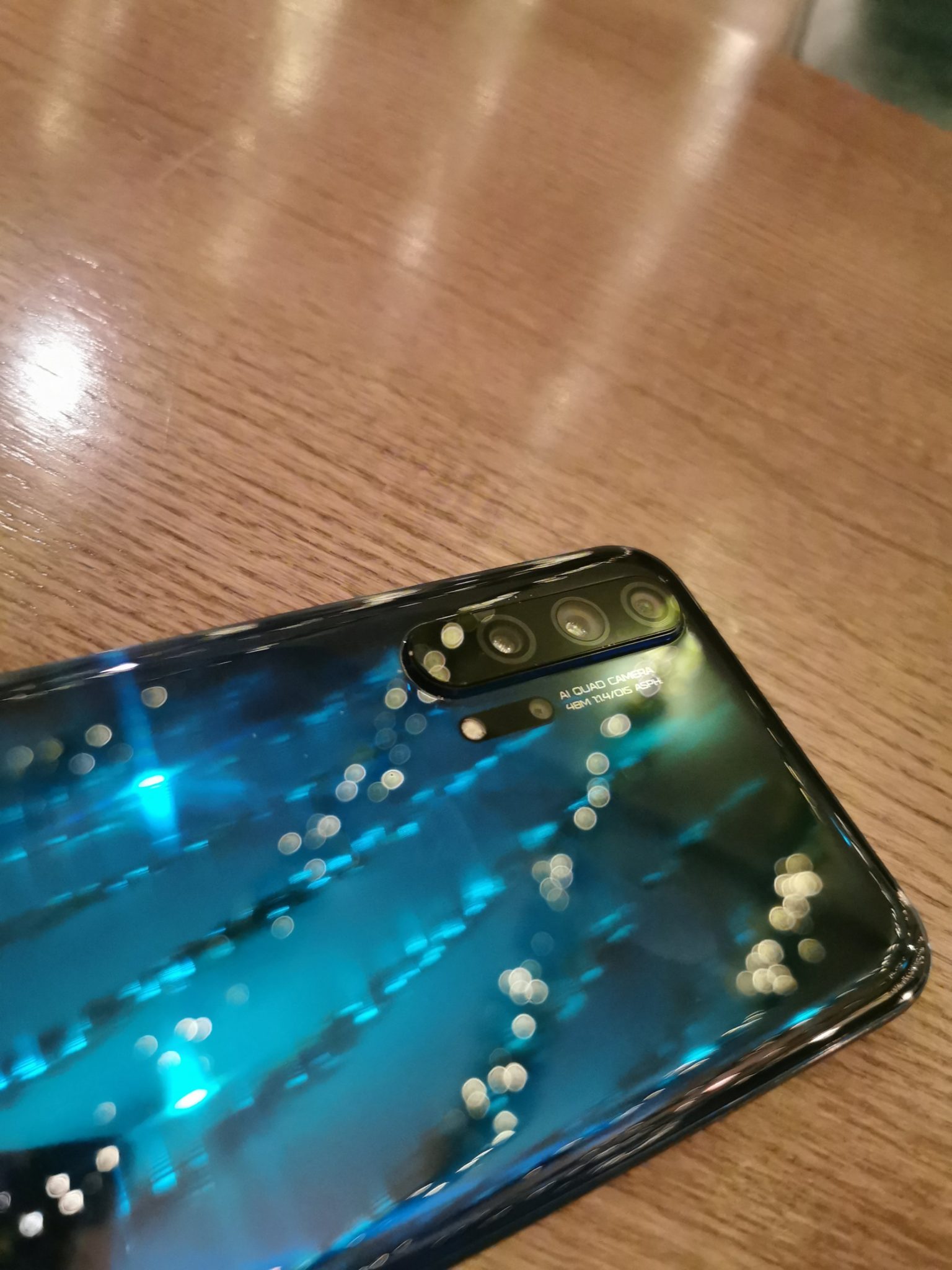 The last bit of business that we need to take care of is the hands-on video. This was shot at the venue which had some pretty terrible lighting. I was unable to get the normal Honor 20 Pro, so I went one better and used the Moschino version of the phone. I hope you’ll enjoy!