Vodafone have always had some great roaming offers, and they often get quite public about being the best network for roaming.

They’re are not just just great on their pricing abroad, they offer the most locations for 4G roaming from any UK network, and when I tried in Tenerife last year got speeds of around 100Mbps.

Global Roaming is the service offered to customers allowing them to use their inclusive calls, texts and data in many locations. Those a bit further away get the same but for a cost of £6 a day.

In May, Vodafone are changing some of the £6 a day locations bringing in an additional 42 to the list, and these are below. 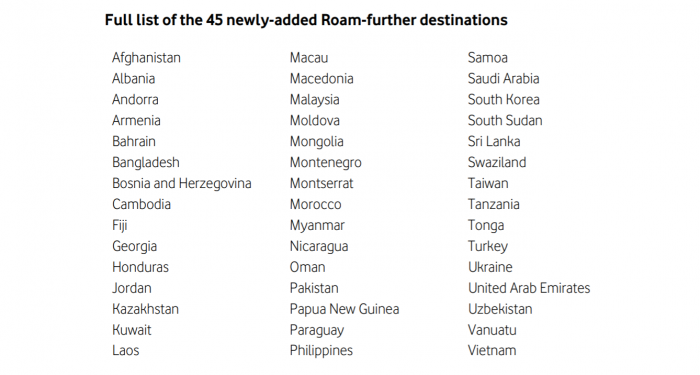 Whilst this is great news for many, the company have decided to move Albania, Bosnia and Herzegovina and Turkey from the free roaming service to the £6 a day version instead.

Customers won’t need to do a thing to benefit from these locations changes, just go abroad, pay your £6 per day and use your phone with no worry on cost.