I’m definitely more of a Twitter person myself, and have the official app installed on my Android phone. I have a bit of a love / hate relationship with the app because it tends to conveniently “forget” my settings every time I update it, but I do go back to it as my default app of choice. Why, I’m not quite sure, especially when there’s many other options on the Google Play store. Flamingo, Fabric and Finch are all good options, but until now I’ve stuck with the Twitter app from Twitter themselves. Now, perhaps far later than anyone else, I’m asking myself … why?

The app is becoming crammed with more ad more “sponsored tweets”, “Suggestions” and “Moments” which I’m really not interested in. These are all minor irritants though, because the adverts that pop up don’t strictly adhere to any real rules. 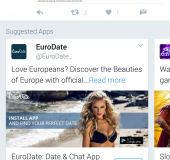 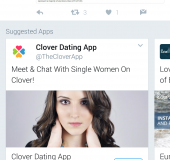 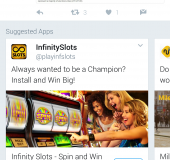 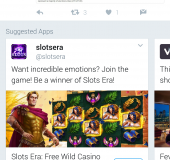 Take last night for example. Amongst the tweets came a sideways-scrolling stack of app suggestions. Now, the gambling ones I can deal with. I don’t mind adverts for the William Hill casino and slots etc. But there’s quite a few more suggested apps that kept coming up. The dating apps I can deal with, but when they’re a little provocative like these “European beauties”, it’ll create more than a raised eyebrow with my wife.

“Who’s this? Why is this in your timeline? It must be there because you’ve searched for it, it must be in your history!”

..You get the general idea.

However, this isn’t where I got into trouble. Oh no. The first app suggestion was for something called “Duby” which doesn’t do a great deal to hide the fact that it’s basically a forum for fans of weed. You can, according to the developers..

Share images of your weed strains, stoner selfies, and send private messages to friends near you. It basically helps you grow the stuff then. The developers actually state that this app is meant for “dispensaries, growers, and fans”, but then makes a rather weak attempt at distancing itself from providing direct information by saying that it is “not a weed shop, finder, or directory. Additionally, it does not directly provide strain or grow information”.

Whilst that’s true, it does give you a very easy access to others who will be able to help. 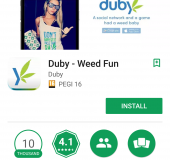 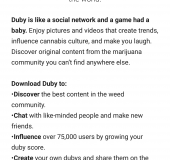 That all said, this sort of app isn’t new on the Google Play store, and there’s many other apps that are similar to this. I should go into the Google Play settings to sort this one out really, as the app is classified as “PEGI 16” and falls under the “Drugs” category, so is easy to filter in that respect, but I can’t find a similar setting in the official Twitter app.

So, I’m now on a mission to find a new Twitter client at last. Anyone got any suggestions? What do you guys use and what would you recommend? Do let me know in the comments!