Those of us who use Siri and Google Now will be familiar with the difficulties and idiosyncrasies of using a voice assistant. They sometime work and sometimes….. they don’t. They struggle with regional accents (if you are a Brummie or Glaswegian, you get me). Sometimes they are just plain stupid with their answers too.

We have all been there. We use it for a few days then give up. However, Microsoft believe that they have the voice assistant to rule them all – Cortana.

Now I am sure that you being a well educated (in mobile anyway) bunch will know exactly what Cortana is, but just in case a recap was needed here is a quick video..

So why is this news?! You can get Cortana only on those “rubbishy*” Windows Phones. Well, dear reader, that day is about to come to an abrupt end if you happen to live in the United States of Trump America. Cortana has now bridged the gap to land on iOS and Android. After conquering the Windows laptop and tablet it now wants to take over your iPhone, iPad and Android device.
Regrettably as I am not an American I cannot actually test this out for you but here are some lovely pictures instead. 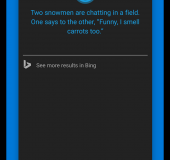 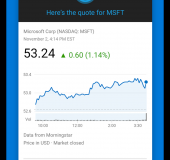 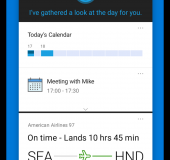 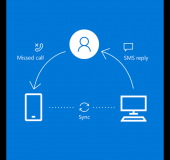 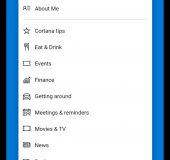 There is some good news though. It will be coming to the civilised world in the near future and by the time it hits us I am sure they will have made it even better.

I do use Cortana on my Surface 3 and it is really good but it will be even better when it arrives in my phone. Regrettably this does give you one less reason to get a Lumia 950XL, but I like the fact that Microsoft have done this as it shows how they are much more open to providing services to other OS platforms. It gives me a warm gooey feeling inside like the tech world is being given a hug.

Sorry I have a had a long day….

Here is a mirror link where you can download the Cortana app if you want to test it. We can not vouch for its credibility and you install the APK at you own risk. I would recommend not using on a daily driver.

Cortana: Now available where and when you need her, no matter what smartphone you choose

Cortana was created to be a truly personal digital assistant – available on the go, no matter where or when you need help, and on whatever device you carry. That’s why it’s important to us that we bring Cortana to not only the Windows 10 ecosystem, but to other platforms. Today, we’re excited to announce that Cortana is available on select iPhone, Android and Cyanogen OS powered devices as a great companion experience to your Windows 10 PC.

In May, we announced that Cortana would be the first personal digital assistant to help you complete tasks across your devices, from PC to phone and vice versa regardless of your device of choice. Today is a big step in delivering on that promise – bringing even more ways to save you time and effort anywhere you need it:

Reminders that Travel with You: Set a location-based reminder on one device and have it pop up on your smartphone when you arrive at the location. This time of year means keeping track of holiday gift lists and to-dos. You can set a reminder on your PC to pick up a bottle of wine the next time you are near the grocery store and Cortana will remind you on your phone the next time you are at that location.

Never Miss a Phone Call: In a meeting and can’t answer your phone? With the Cortana app, get a missed call alert on your Windows 10 PC and let Cortana send a text back letting them know you’ll call them later – all without leaving your PC.*

Convenient Tracking: This holiday season, you’ll be able to track flights, packages and more using Cortana on both your phone and your PC, and get the updates on the device that you’re on so you don’t miss a thing.

Of course, the Cortana app comes with the same intelligence as Cortana on your PC, with the ability to look up information and give helpful suggestions. The information stored in Cortana’s Notebook on your PC such as interests, weather and more, will travel with you across devices and any changes you make on one will be reflected on your other devices.

While the Cortana app is fully-featured, there are some things Cortana can do on Windows phones that aren’t currently possible with iOS or Android*. This includes toggling settings or opening apps, and the ability to invoke Cortana hands-free by saying “Hey Cortana.” The ‘Phone Companion’ app on your Windows 10 PC will help you install the Cortana app from the Google Play or Apple App Store onto your phone so you’ll be able to take the intelligence of Cortana with you, wherever you go.

In addition, as a result of our close partnership with Cyanogen, we created a more integrated experience to enable Cortana’s voice activation ‘Hey Cortana’ on Cyanogen devices so you can call on her while on any screen or when you’re immersed in an app. The custom integration includes the ability to ask Cortana to toggle network modes, power down your phone, and turn on Quiet Mode amongst other features. With Quiet Mode enabled, all notifications, calls and alarms will be silenced.

This is just the start of our partnership as Cortana will be rolled out to other Cyanogen OS powered devices early next year with even greater functionality, and we look forward to doing even more together in the future.

The Cortana app is available today in the U.S. and China for iPhones on iOS8 and up and Android 4.1.2. And will be available in the U.S. on One Plus One powered by Cyanogen OS with the 12.1.1 over-the-air update later in Dec. Learn more about Cortana here or just say “Phone Companion” to Cortana on your Windows 10 PC to get set up.

* The “Hey Cortana” feature is possible in the Android app store version if the user is in the Cortana app or in the Android home screen. Missed call notifications work for Android devices with a Windows 10 PC of 1511 or above.