I have been on the Sony booth here at IFA and have had a chance to have a play with their latest devices.

Xperia Z5 Premium
The build of the phone is brilliant and that mirror finish on the back is superb, although it will attract a rediculous amount of fingerprints. What we have here is a complete package which oozes premium build quality and flagship specs. Let’s have a look at those specs now…

So some pretty awesome stuff here and a World 1st being the glorious 4K screen. The phone has all the usual trinkets that we have come to expect from the Xperia Z series and it does indeed carry on with that design language. It is also using the new power / fingerprint reader. Here is a small gallery of the phone. 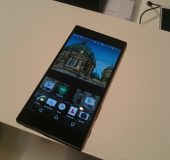 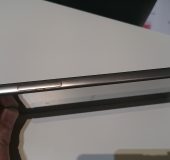 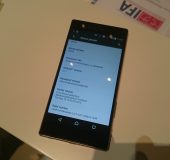 Xperia Z5
Sony also announced its mainstream device – the Xperia Z5. This is the direct upgrade from the Z3+/Z4 and brings its own pretty comprehensive specs to field. Like the Premium device this too has the new fingerprint reader / power key. It works very well and is in the perfect position. Let’s dive into the specs of this below…

This is going to most likely be the more mainstream option for the market and it has already been announced that it will be available from most UK carriers (Three and Vodafone to name just a couple). I am still using the Z3 and the Z5 seem very much to be the natural progression of that design.

Here are some pics of the Z5.. 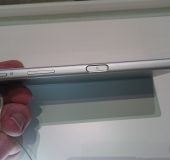 Xperia Z5 Compact
Finally the baby of the group – the Z5 Compact. Again they have another cracker on their hands and this one will fly off the shelves. It also has all the new toys but the screen is scaled down to 720p, still maintaining the same dimensions as the predecessor. The design has been bulked up a tad this time arond and I can only presume this is down to the Snapdragon 810.

Again here are the specs..

And here are some pics of the device.. 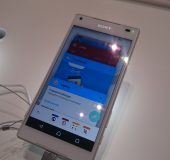 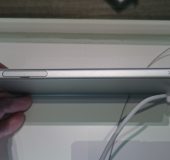 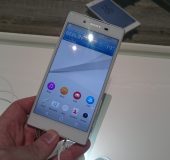 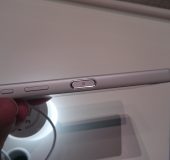 So there you have it, the Sony Z5 range from IFA. I hope that we will be getting some the devices in to review in the next few weeks.

So keep checking back with us for more.

“Smartphones are part of people’s lives” said Hiroki Totoki, President and CEO at Sony Mobile Communications. ”Since users already create, share and enjoy most of their content on the go – we’ve set out to bring Sony’s latest innovations in camera, design and display to ensure the Xperia Z5 series is the best possible lifestyle and entertainment platform.”

A mobile camera experience unlike any other

The camera is capable of the fastest autofocus in a smartphone, a powerful blend of speed and accuracy to capture split-second moments with ease. It delivers a ground-breaking speed of just 0.037 seconds – faster than the blink of a human eye (average 0.1 – 0.4 s), so whether you’re jumping for the frisbee in the park, diving into the pool or catching air on the vert ramp, you’ll have the power to preserve spontaneous action in real-time.

A combination of the large 23MP Exmor RSTM for mobile sensor and advanced processing software lets you get close to subjects; whether it be a landmark, architecture or other objects of interest, with 5x clear image zoom with minimum loss of quality. And, advancements in low-light photography mean you can capture clearer photos at night or in darker surroundings with less noise and blur – perfect for capturing a sunrise or night skyline.

With the continued popularity of content capture for social media, Xperia Z5 series brings significant advancements in the evolution of Sony’s SteadyShotTM with Intelligent Active Mode for video. Further improvements mean you’ll be able to continuously capture action smoothly, such as riding a bike or skateboard, free from jolts or shudders. It also features better low-light performance without blur.

Designed for life, with the same flagship experiences in a choice of form factor

Designed by leading creatives at Sony’s Creative Center studios in Sweden and Japan, Xperia Z5 presents a svelte continuous plate form, with a metal frame and frosted glass back. It’s striking, comfortable to hold and waterproof for everyday convenience. With a 5.2” display, sleek looks and Fall 2015 fashion and interior design cues, colours range from elegant to expressive for any personal style or taste; White, Graphite Black, Gold and Green.

For those who prefer a compact smartphone, Xperia Z5 Compact brings the same great camera technology and features in a pocket-friendly compact device. It delivers uncompromised performance in a beautifully compact design with a 4.6” display, perfect for one-handed use. And, Z5 Compact let’s you express personal style with fresh, vibrant colours including Yellow and Coral, in addition to White and Graphite Black.

Both devices represent iconic Sony craftsmanship with premium materials throughout, including frosted glass finishing to the rear and a subtly etched Xperia logo side engraving, as well as capless USB for quick efficient connection and charging.

To the side, a new integrated fingerprint sensor power button means each device is personal, protected and easily unlockable with a simple pick up and press in one natural movement. It will also support the FIDO standard; authentication via fingerprint for online payment services – with news on first partners shared closer to launch.

Xperia Z5 and Xperia Z5 Compact are powered by the Qualcomm Snapdragon 810 processor, featuring octa-core CPUs, 64 bit capabilities and ultra-fast 4G LTE speeds, letting you reach new levels of performance for video, photography and gaming. Whether you’re multi-tasking over Wi-Fi or the latest 4G network, both devices deliver the speed you need. Download email with attachments in seconds and enjoy video streaming with no delays or unwanted buffering.
Powerful smartphone features demand smart power management, Xperia Z5 and Xperia Z5 Compact are equipped with Sony’s incredible up to two-day8 battery stamina and innovative power-saving technology, which gives you superior long-lasting battery performance. With Qualcomm® Quick Charge™ 2.0 enabled on the new devices, you can get 5.5 hours usage with just 10 minutes of charging with a certified Quick Charge™ 2.0 charger, such as the Quick Charger UCH10 (dependant on market variants)9.

Xperia Z5 Premium is the world’s first 4K smartphone with a sharp, vivid 5.5” 4K TRILUMINOS™ Display for mobile and IPS, where breathtaking detail is depicted with pinpoint accuracy for the most natural images, at four times the resolution of Full HD.

Xperia Z5 Premium will upscale your favourite content to 4K, enhancing any native or third party videos or photos so you can view Netflix, YouTube or your holiday shots in rich, vibrant 4K detail. And, Xperia Z5 Premium is built to allow you to get creative by capturing in 4K and immediately enjoying the content on Z5 Premium, with the option of preserving any moment as an 8MP quality image.

And, why not port the memory card from Sony’s 4K Action Cam FDR-X1000V to Xperia Z5 Premium to enjoy your footage immediately – or simply connect to the big screen either wirelessly via DLNA or with MHL 3.0 to enjoy your content on a 4K TV.

Xperia Z5 Premium is designed from the ground up as a high-performance mobile device, also powered by the Snapdragon 810 processor. A high capacity 3430 mAh battery lasting for up to two days, with quick charge capability eliminates the need for regular charging.

Xperia Z5 Premium features a large 32GB internal memory, with the capability to take a 200GB external microSD card, which offers extra room for 4K videos and movies, and images too. Xperia Z5 Premium also features Sony’s innovative memory on display feature – the data transfer between processor and device is optimized so Xperia Z5’s display memory technology remembers the display of images seen on your smartphone and caches the image or video so that you don’t need to reload the full image each time you view it – preserving battery power in the process.

A flagship series powered by an entertainment and content ecosystem

And now for the first time, Sony’s new High-Resolution Audio Headset MDR-NC750 allows you to enjoy combined Hi-Res Audio music with Digital Noise Cancelling – your tunes as they were intended to be heard, with ambient background noise reduced by up to 98%.

Keep playing your favourite PlayStation®4 (PS4™) games wherever you are in the home with PS4 Remote Play10. Simply connect your Xperia Z5 series device to your PS4 via home Wi-Fi and use the DUALSHOCK®4 Wireless Controller to ensure you never miss a minute of the action – whatever room you are in.

And to ensure you continue to enjoy the best experiences that Sony has to offer, all Xperia Z5 series users will benefit from access to Xperia Lounge Gold – delivering the world of Sony entertainment at your fingertips. Get access to exclusive competitions and offers; be among the first to try out new apps; and enjoy the latest movies, TV episodes and music included with your device.

A range of stylish and protective Style Cover Window cases will be available for each Xperia Z5 series model at launch, in respective corresponding device colours – each will let you access your favourite smartphone widgets through a smart window.

Legal
1) Facts and features may vary depending on local variant. 2) Operational times are affected by network preferences, type of SIM card, connected accessories and various activities e.g. playing games. Kit contents and colour options may differ from market to market. The full range of accessories may not be available in every market. 3) Icons displayed are for illustrative purposes only. The homescreen may appear different in your product. Some features may not be available in your country or area.

4 Xperia™ Z5 series devices are waterproof and protected against dust as long as you follow a few simple instructions: all ports and attached covers are firmly closed; you can’t take the phone deeper than 1.5m of water or for longer than 30 minutes; and the water should be fresh water. Casual use in chlorinated pools is permitted provided it’s rinsed in fresh water afterwards. No seawater and no salt water pools. Abuse and improper use of device will invalidate warranty. The phone has an Ingress Protection rating of IP65 and IP68. To see what this means and for more information see http://support.sonymobile.com/global-en/dm/waterproof.

6 Based on the results of technical testing the speed of autofocus of Sony’s Xperia™ Z5 Compact and Xperia™ Z5 smartphones with Apple iPhone 6, Apple iPhone 6 Plus, HTC One M9, LG G4, Samsung Galaxy Note 4 and Samsung Galaxy S6 (being the “Leading Smartphones” defined by Strategy Analytics as the top six flagship devices according to shelf share in 2015). Research was conducted by Strategy Analytics between 5-6th August 2015. For more information, go to: www.sonymobile.com/testresults/

7 In compliance with CIPA guidelines (http://www.cipa.jp/index_e.html)

11Availability may vary by market

The camera interface depicted will be available on Sony Xperia™ Z5, Z5 Compact and Z5 Premium starting from November 2015 as a software update. Data charges may apply for the update