A tablet that has the horsepower provided by a phone? Well we’ve seen that before, but not quite like this, and definitely not with a name like this. The “TransMaker” isn’t anything to do with that Sean Bean drama, no. This is a dumb tablet which works with your Samsung Galaxy S3 or S4. Slide in your phone to provide the brains and, BOOM, you’ve got a 10″ 3G tablet.

This particular device, which is currently on pre-order, doesn’t have a price as yet. It does, however, have a keyboard dock too, so you can effectively turn your Samsung phone into a Samsung Galaxy laptop / tablet.

The device works with either the S3 or S4 and has a 10.1″ 1200×800 HD Super IPS LCD capacitive touch panel. The TransMaker includes a male connection (ahem) which “slides into place easily and solidly”. Calls can then be made via Bluetooth, so you’re not totally disconnected when it’s plugged together. 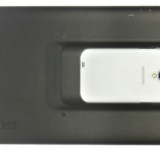