Last but not least, we have the HTC One V. It’s the re-birth of the HTC Legend and there’s a noticeable “chin” on the device. This one has the slowest CPU out the the HTC One Series – a 1GHz single-core and that’s a smaller 3.7″ screen at 480×800. It is, though, the cheapest of the bunch and will turn up on April 26th for a mere £264. For that you get HTC Sense, Android 4.0, Beats Audio inc. VAT), 4GB of storage and yay – a microSD expansion slot.

A 1500mAh battery powers the show and you get the same ImageSense technology buit into the camera, albeit a 5 megapixel shooter. This technology lets you snap shots quickly and repeatedly, plus you can snap photos while you’re filming. There’s the usual array of sensors, WiFi, GPS, Bluetooth and the ability to use the HTC car-plugin, but there’s no front camera by the looks of things.

We were again very impressed with this puppy – it’s got the same aluminium unibody and, for the technology you’re getting, it’s pretty cheap too. If you want to see the interface in action, check out our HTC One S post. 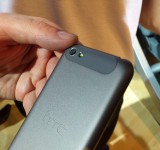 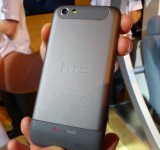 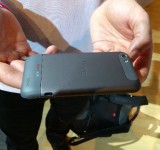 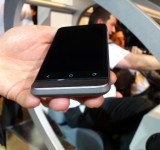 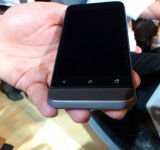 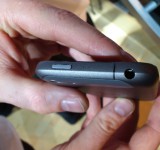