Clove are now taking orders for the white version of the Galaxy Nexus 16gb for £498.00. They have said that will be available on February the 13th.

It’s not all white though, the bezel is black unlike the white version of the Galaxy S2 which is a disappointment. But hey you can’t have everything your own way. Click here for the order page. I will certainly be tempted to get one of these. White things do seem to attract me. 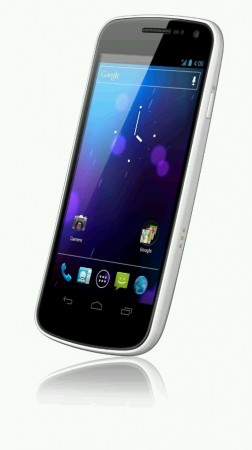 Having previously manufactured the Google Nexus S, Samsung has once again been chosen by Google to apply its innovative smartphone expertise to its latest handset and this knowledge is married perfectly with the range of new features that Ice Cream Sandwich has to offer.

A range of cutting edge Android features are introduced via the Galaxy Nexus thanks to Android ICS. These include Face Unlock, a means of unlocking the device by looking at the 1.3 MP front facing camera. There’s also ‘Android Beam’, a feature that allows you to easily share contacts, apps, websites and more between two NFC enabled Android devices. Improvements have been made to several of the stock apps, such as camera, calendar and the web browser. More detail on the new Ice Cream Sandwich features can be read here.

Of course, it’s not just the software features, but also the hardware features of the Samsung Galaxy Nexus that are bound to impress. A 1.2GHz dual-core processor with 1GB RAM make this handset very powerful indeed, while the 4.65″ Super AMOLED display is also an industry first. As well as the 1.3 MP front facing camera, there’s a 5MP snapper on the back of the Galaxy Prime, which features and LED flash and shoots 1080p video,

Needless to say, the Galaxy Nexus is not lacking in connectivity features. The usual suspects – Wi-Fi, 3G and Bluetooth are all included, but there’s also NFC capability and the new ‘Wi-Fi Direct’ feature that has been introduced thanks to Android ICS. With Wi-Fi direct, users can connect to nearby peer devices over Wi-Fi without the need for an internet connection. This allows for the instant sharing of files, media and third party apps. In terms of internal storage, this version of the Galaxy Nexus comes with 16GB of space, so there’s plenty of room for music, movies and photos.

What’s in the box of the Samsung Galaxy Nexus (16GB) – WHITE?