A recent study by Symantec has found Trojans attached to various apps in the Android Market. The Trojans found are Android.Counterclank and Android.Tonclank, which worryingly is a bot-like threat that can receive commands to carry out certain actions, as well as steal information from the device. 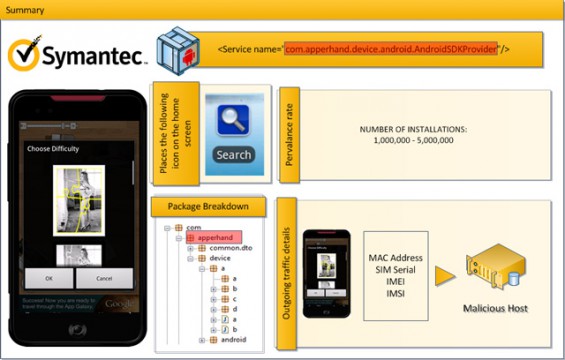 It sounds like the Trojan developers have took some fairly popular apps and grafted their Trojan onto the main app. When the main app runs the Trojan starts working as well, harvesting your info. The infected apps are below. These have now been removed from the Android Market. But a lot of people will have been infected.

Google really need to change the way the Market works. They need to check apps before they are published. It was only last year that Android and it’s viruses made the front page of the national press (it was a piece of propaganda in the Metro) but this sort of thing is damaging for the Android brand.

People just install stuff willy nilly without a care in the world. I am quite often asked at work to have a look at someone’s phone to find it is full of apps forcing adds onto them all the time and skewing web browsing results.

The other problem is that some of the Anti-Virus firms have got an absurd idea of what a mobile user is willing to pay for an app to protect their devices. Time to have a look at the free alternatives I think.