Remember this?  The original, laser-disk arcade game first appeared in 1983, the same year as the first Star Wars arcade game and as Nintendo produced the 8-bit Nintendo Famicom.  It was about the same time that I fell in love with arcade games; shortly after I got a Sinclair Spectrum (a whole 48k of RAM!), and so begat my affair with games/computers/gadgets.

And back then, it seemed fantastic.  The games in those games used vectors or sprites for their graphics, then along came Dragon’s Lair allowing you to play a frickin’ cartoon!  Well that was my impression (and everyone else’s) at the time – I know now that Dragon’s Lair involves nothing more that timing your moves/’sword’ between one QTE and the next.  The other big problem with the game was that it was terribly linear, one thing that the Android version seems to overcome, to a degree.

Anyway, I’m getting ahead of myself.  Dragon’s Lair is available from the Android Market, and the initial 25 megabytes seems to be awfully small for a game based on FMV.  After you start the game, it tells you that it needs to download ‘additional resources’ – meaning over a gigabyte of MBs are sucked down; there’s your FMV!  Of course, I wouldn’t recommend do this on your 3G connection

– a WiFi connection is needed!  Even on my 30MB broadband, it took 10 minutes to gobble up all that data, and before long I was presented with the main title screen.  From here you can watch the arcade game’s ‘attract sequence’, read some scant instructions or view the high scores.  The options menu allow you do change the game’s difficulty (the game can highlight the corresponding button/direction you have to press, when it’s needed), whereabouts on screen the gamepad is located.  There’s an option for compability as well – although Digital Leisure have produced graphics for several resolutions (yes, it works on tablets as well), the compability option is there so any non-supporting resolutions will ,worth fine.  Well, that’s what it’s meant to do – My Samsung Galaxy SII wasn’t able to get the ‘tutorial’ option to work all.

By pressing pressing the ‘play game’ first lets you play either the ‘arcade’ version or the ‘Home’ version – the difference being that the ‘Arcade’ version using the same animations as the arcade game, but uses them in a non-linear fashion, ie. seems to throw a random QTE sequence one after another, and a QTE can be one that you played a few sequence 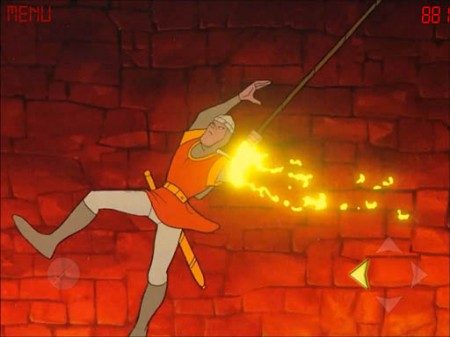 s ago!  The ‘Home’ version sometimes uses animations which ,weren’t used in the original version, ie. Dirk (that’s you that is), as he crosses the drawbridge into the castle at the start of the game, has to battle with a monster living in the moat.  In the Arcade game, Dirk starts in the castle.  The other difference it the ‘Home’ version is that the sequence of QTEs are very linear.

That’s the problem with Dragon’s Lair, though.  After a time you will remember the QTE sequences and when you press the buttons, and the ‘Home’ version (being linear) is the one you’ll finish first.  After that there’s is the ‘arcade’ mode, but I didn’t see much point, expect to get my name on the high scores – after all, I’d seen all the animations already.  So Dragon’s Lair is something I show to others, to show what my phone can do.  Of course though, all that data is using up storage space which I need for other apps – bye bye Dragon’s Lair, is was fun when it lasted! (Not very long)