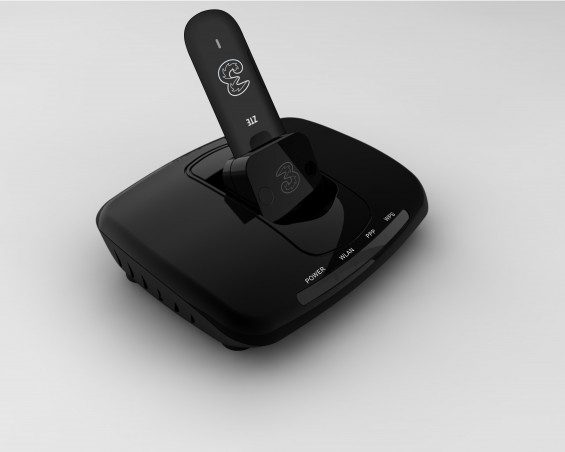 Share your Three mobile signal with up to five different devices using this, the new Mobile Broadband WiFi hub. Also known as the ZTE MF10 Dongle Adapter it will convert an existing USB mobile broadband dongle into a hot-spot. So, instead of plugging your mobile dongle into your laptop you’ll instead plug it into the hub to activate the WiFi hotspot.

Get more info below. Pricing isn’t available just yet.

Today Three announces that a new Mobile Broadband Wi-Fi hub (ZTE MF10 Dongle Adapter), will be coming soon to the network. The gadget converts an existing USB mobile broadband dongle into a Wi-Fi hot-spot, allowing people to share their 3G connection via Wi-Fi at home.

The Wi-Fi Hub enables a dongle’s internet connection to be shared with up to five Wi-Fi devices including tablets, games consoles and laptops. Plus, the Wi-Fi Hub also includes an Ethernet socket allowing it to be used as a router for wired connections.

The Mobile Broadband Wi-Fi Hub is compatible with almost all USB dongles*, including the recently announced Premium Dongle from Three which is HSPA+ compatible, offering up to 40% faster browsing. These figures are also set to increase even further as Three ramps up its upgrade programme and rolls out the HSPA+ 21.1Mbps standard across its high-speed 3G network.**

Information on pricing and availability will be announced soon. In the meantime, take a peek at the coming soon page for more information.

** Three is aiming to have 80% of its network upgraded to HSPA+ by the end of this year, with the rest following soon afterwards.