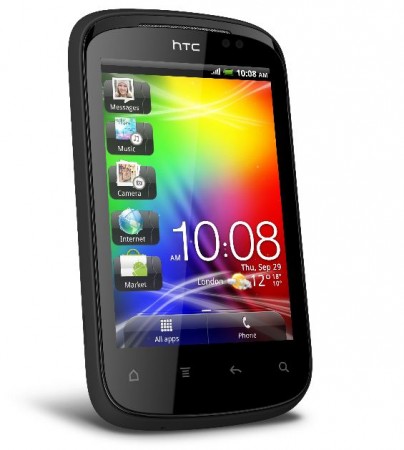 Three have announced that they will be carrying the HTC Explorer “soon”. The new handset is aimed at “the first time” smartphone user and has a 600Mhz CPU, Android 2.3 and a new version of the HTC Sense interface. A the back there’s a 3.2 megapixel camera whilst up-front there’s a 3.2″ screen.

The Explorer includes a range of tweaks to make the smartphone experience less initmidating for a first-time user but still has advanced specs like GPS and WiFi.

Today Three announces the HTC Explorer will be coming to its stores soon.

Running Google Android 2.3 (Gingerbread), the pocket-friendly HTC Explorer is styled in Smart Black and packs a punch with a 600MHz processor, 3.2MP camera and 3.2” screen, perfect for browsing the web and updating your favourite social networks.

The HTC Explorer also comes preloaded with Facebook and Twitter in the HTC Friendstream app, allowing users to sync contacts and easily share status updates, pictures and videos from the get go. Plus, this smartphone also allows you to back up and restore important information so that you’re never left high and dry.

Sylvia Chind, head of handsets at Three said, “The HTC Explorer offers a fantastic experience for first time smartphone customers and HTC fans alike. We look forward to introducing this handset on our award winning network*.”

Information on pricing and availability will be announced soon. In the meantime, why not take a peek at Three’s blog for a sneak preview or the coming soon page for more information.

*Three is rated as the best network for speed, overall quality, ease of use and customer satisfaction by UK Smartphone customers (YouGov).