Cat Deeley. Photoshoot. Right, now I’ve got the attention of 90% of our audience I can talk about the new Samsung Galaxy Tab. The Galaxy Tab 7.7 appeared at the IFA show in Berlin recently and the Galaxy Tab 10.1 got the full hands-on treatment back at Mobile World Congress. Despite the best efforts of Apple, sales of both units look set to explode and Samsung have commissioned Cat Deeley to show off the new tablet.

In this exclusive behind-the-scenes video, Cat says why she likes the new Galaxy Tab and what she’ll be using it for..

The Tab builds on the success of the original 7″ version with lightning fast speeds and better battery life, but the first thing that we noticed was the stunning AMOLED screen. Combine this with a HD movie playing at full 1080p through the stereo speakers and you can quickly immerse yourself in a film. With sexy curves and a slim design it’s surprising that I’m still talking about the tablet, not Cat Deeley.

Many tablets ship without the Android Market, but Samsung have ensured that it’s added into all of theirs. I personally use the Cisco VPN app from the Market to hop into a work network and get some projects signed off. It seems a whole lot easier to work when you’re sat on the sofa, mug in hand. 🙂

I’ll admit to being a brand-fan too. My main phone is a Samsung Galaxy SII, our home TV’s are Samsung – even the monitor I’m looking at now.

We’d like to hear from Galaxy Tab owners, so get in touch via the comments form below. Let us know your thoughts on this fantastic tablet. 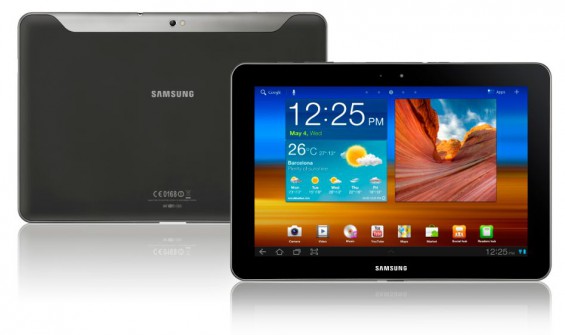