I realised that I didn’t have much in the way of entertainment installed on my iPhone 4 that didn’t depend on the internet – of course I only noticed this when I didn’t have internet, when does that ever happen?!

I’d long since exhausted all the Angry Birds variations and fancied something that didn’t involve catapults or dealing with anything particularly angry.

MEGASTUNT Mayhem caught my eye as I liked the idea of chucking monster trucks around an arena and performing cool tricks – and the devs at Level Eight released a demo version which ensured I was happy before parting with two quid: This may seem trivial but it soon adds up! I hope to see more  games coming with a try before you buy option as there’s no substitute in deciding if you like it than actually playing it. 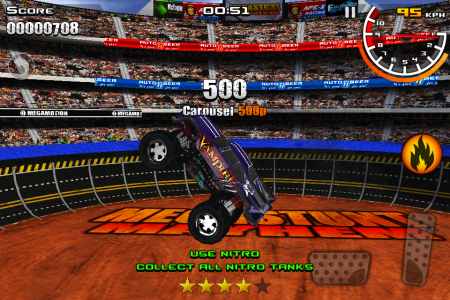 So the game itself has kept me amused for a few days now (ironically I haven’t been without internet / 3G). Game play is simple and it starts with some tutorial rounds to get you used to the controls and the different gestures you need to swipe across the screen. You can control direction with either tilting the iPhone or using an on-screen wheel. As the acceleration, brake and stunts are all performed using the screen, I stuck with tilting for my steering – I will no doubt get some funny looks whilst playing at the train station / airport staring intently at the screen with my concentration tongue poking out…

Overall I’d say I’m hooked: There are various combos to be had by mixing up front flips / carosels / twisters to be rewarded with ‘AWESOME’ and you can upgrade your truck’s handling / armour / nitro / power stats with the money you earn from each level. There is a built in DLC element too to grab some pre-maxed out stat trucks, nice touch and I know it won’t be long before I drop 69p on a new truck for myself!

There’s one element that falls into the ‘angry’ category though: the soundtrack! Lots of heavy metal noise going on that’s not my cup of tea but thankfully it can be muted in the settings!

I love the rag doll driver that is flung out of the windscreen when your truck hits an obstacle too fast, nice touch!

Watch the trailer to see the game in action:

Overall I think this is a great game with some outstanding graphics and it runs nice and smooth on the iPhone 4. It’s all linked to the Game Center and Open Feint so when you do get your internet connection back you can compare against your friends!