Now, You’re probably asking yourself why the hell I’m posting an App recommendation at half past eleven on a Friday evening….. You weren’t, oh suit yourself.

The reason for the late posting is because this is a sort of joint suggestion for you, one is the App and one is an account to follow on Twitter, both tied together superbly with this App, as you’ll see…. 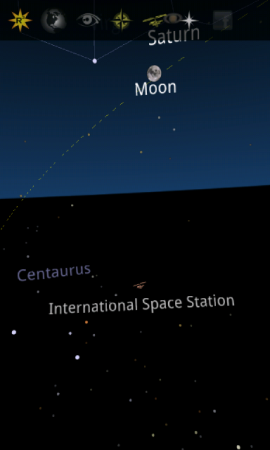 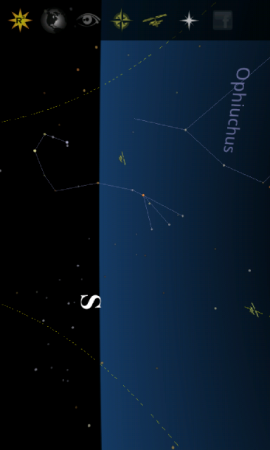 So, Space Junk is basically Google Sky Map but with a few bells and whistles. It’s called Space Junk because it quite literally shows all the junk floating about in space, well, all the stuff that is actually being used and tracked.

It’s very cool, if you haven’t seen Sky Map or Space Junk before they turn your smartphone into an image of the sky that uses the Gps to track where the phone is pointing and put the various stars/moon/satellites etc onto the screen, moving it in real time with the phone with labels telling you what they are.

You can switch various options on and off so not to clutter up the screen, but to be honest I leave it all on as it’s fascinating just scanning around and looking at things.

The second ‘part’ of this recommendation that really brings Space Junk to life is the regular passes of the International Space Station (ISS) and the superb Twitter account @Twisst. Follow @Twisst on Twitter and make sure your location is in your Bio and they will send you daily tweets telling you when the Space Station is going to be passing overhead and from what direction. You then can use Space Junk to track the space station moving along, clearing the horizon  and eventually coming into view. 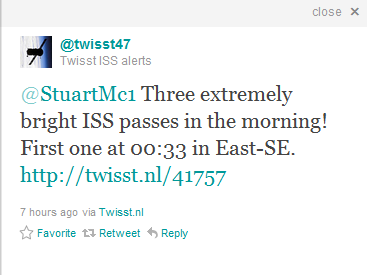 This is one of those instances that really allows you to show your smartphone off and even the most cynical critic will be impressed.

Oh, the reason for the late posting, I was checking if I had Space Junk installed as the Tweet above is the first time recently the ISS has been overhead at a (nearly) sensible time!

Apologies, I’ve looked, but I’m not sure if this is available in the Apple App store. ( Not got an i… device…)